Highway from Kolkata to Lhasa

The Belt and Road Initiative, China’s quaintly named initiative to redraw trading routes around the world may have many shortcomings but if adopted intelligently can certainly usher in a new age of economic prosperity in Eastern India. China has a huge East-West spread and its western part, the Tibet Autonomous Region, while rich in resources has no access to the sea. Russia’s Siberian treasure house, which is similarly landlocked will gradually get opened up as the Arctic polar cap melts and the Arctic ocean becomes navigable but there is no such hope for Tibet. China knows this and also knows the importance of a route to the sea, which is why it is investing so heavily into its all-weather ally, Pakistan. The Karakoram Highway, the China Pakistan Economic Corridor and the Gwadar Port are all pieces of the puzzle that China is trying to put together at great cost. But the cost is not much as in money as in the the way it is forcing a great power like China to accept the dictates of Islamist terrorists like Masood Azhar. China knows that it cannot push a trade route through Pakistan without the blessings of the Islamists and even as it surely knows the terrible price that the Islamists will extract through the Uighur militancy in the far western Chinese province of Xinjiang. China is caught between the need to pander to the devil of Islamist terror and the need of a deep sea port to relieve the claustrophobia in landlocked Tibet. Is there an alternative? That is what we explore in this article.

The nineteenth century saw the British empire locked in the Great Game with imperial Russia as both jostled for influence across the vast spaces of Central Asia. As a part of this international political maneuvering, Lord Curzon, the then Viceroy of India decided to send a British Mission under Col Younghusband to Lhasa in Tibet. This departed from Calcutta in 1903, crossed over from Sikkim to Tibet at Nathu La and after many wars and other adventures later came back, apparently victorious, in 1904. The political outcome of this British Mission to Tibet is no more of any relevance in the twenty first century but the fact that army of 3000 people along with another 5000 odd camp followers could actually cross the highest mountain barrier twice should be an eye opener to anyone who dreams of trans-Himalayan trade routes. 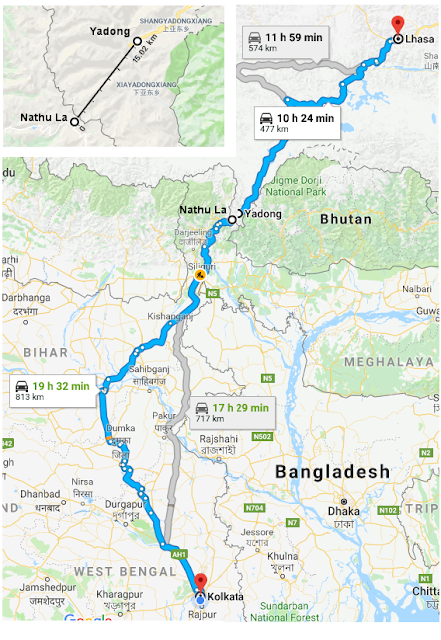 Not having access to the vast resources of the British Empire, but seeking to recreate Younghusband’s route and relive his adventure, this author fired up Google Maps to see if there exists a motorable route that could take one from Kolkata to Lhasa. A straightforward request for directions obviously returns a negative and Google admits that it cannot find a route from Kolkata to Lhasa. But a little tinkering with the map reveals a few interesting facts. First, there is obviously a motorable road that connects Nathu La to Gangtok in Sikkim, then through NH10 to the highway network in India and eventually to Kolkata about 800 km and 20 hours away. Second, the border post of Nathu La abuts the Chumbi Valley, just next to the Doklam Plateau of Tibet where the Indian army has been in confrontation with Chinese army over the construction of a motorable road, but if we ignore this confrontation then there exists a motorable road on the Chinese side. Third, this Chinese highway, S204, that currently terminates at Yadong is a part of the Chinese highway network and connects Yadong to Lhasa which is about 400 km or 10 hours away. Finally, the distance between Nathu La, the last motorable point on the Indian side and Yadong, the first motorable point on the Chinese side is, as per Google Maps and “as the crow flies”, a miniscule 15 kms. These four facts put together mean that the 1200 km road from Kolkata to Lhasa is almost ready except for a 15 km ( or say 30 km, since we cannot fly like a crow!) stretch between Nathu La in Sikkim and Yadong in Tibet! [ See map  on next page]

From this perspective, should we in India object to China building a road in Doklam or should we encourage them to do so? And create a great highway that connects Lhasa to Kolkata …

The benefits of such a highway are obvious. For the Chinese it means an immediate access not just to India, but through the Kolkata-Haldia dock system to the main shipping lines that connect Europe and Africa to the far East. For Bengal and Kolkata this could a veritable blood transfusion for the rejuvenation of its ailing and anemic economic landscape, because Ray, Rabindranath & Rossogolla notwithstanding, maritime trade has always been the lifeblood of Kolkata and South Bengal.

Long, long ago, long before Kolkata or even Bengal existed, this part of the country was known for its maritime trade. Both Faxian and Xuanzang (whom our old history books would refer to as Fa-Hien and Hiuen Tsang) who came to India from China during the time of Harshavardhan have left glowing reports about the great port of Tamralipta, which is identified with modern Tamluk in East Midnapur, on what is now known as the Rupnarayan river. With the siltation of the Rupnarayan, the port shifted to Satgaon, modern Saptagram, located on the Saraswati channel that broke off from the current Hooghly river channel at Tribeni and flowed through Singur - the tragic location of the aborted Tata Nano factory. Singur is perhaps where Bijoya Singha had set sail from to reach, occupy and rule Sinhala or modern Sri Lanka. Subsequently, with the closure of the Saraswati channel, the Ganga waters switched back to what is now known as the Hooghly river and the British set up their trading post first in Hooghly, on the west bank,  and when this was devastated by a cyclone they moved to Calcutta -- and the rest as they say is history. The KG -- King George’s -- dock system of Calcutta became the heart of the vibrant economy of Bengal and eastern India till it received a body blow during the Partition of India. Calcutta’s  pre-eminence as a centre of trade and industry survived for another quarter of a century till it was finally done in by the Communists who not only killed all industry but also devastated its educational institutions leading to a near complete exodus of intellectual capital. Commerce in Calcutta, now called Kolkata, is now dominated by an industrious tribe of up-country traders and in a fortuitus turn of events, it is these people who are best placed to leverage a new trade route if it were to open up between Kolkata and Lhasa.

Some may be apprehensive that a highway like this would facilitate a Chinese military attack on India. These is unlikely in the 21st century. If the Lhasa-Kolkata highway were indeed to open up as a new “Silk Route”, the biggest beneficiary would be trade but there could be a positive strategic dimension as well. If China sees this as a safe and secure route for its products to reach the sea, then its dependence on Pakistan will reduce and it will have the freedom to take a more honest view of the Islamist mischief that is being spawned at its western edge. A strong and powerful flow of money across the Himalayan border will automatically lead to a reduction of military hostility across the same because the interests of the trading community will have a moderating effect on the militarist nationalism of fringe groups.  Chinese angst over the its current border along the McMahon Line in Arunachal may also be assuaged and its leadership would not lose face over its inability to occupy what they believe is Southern Tibet.

Would it lead to a increase in Chinese exports to India and have a negative impact on the balance of trade between the two countries? This is also unlikely. While trade is certainly facilitated by the ease of movement and cost of transport, the real driver for trade is the topology of demand and supply and this will certainly not be impacted. The Kolkata-Lhasa highway may impact traffic on other, longer, sea based routes, but its impact on the overall volume may not be significant. On the other hand, given the lack of agricultural land in Tibet, there may be a market for the reverse flow of food products and fresh vegetables and this may give a fresh impetus to agricultural income in eastern India. Vegetable farmers in Bengal and Bihar may see a huge new market opening up through Nathu La.

What would it take to make this trade route operational? First of course, the section from Nathu La to Yadong must be completed and we can rest assured that the formidable Chinese border management machinery can make it happen in a short time. We are not aware of the condition of roads in Tibet but certainly the existing motorable roads in Sikkim and Bengal needs to be strengthened and widened. Between the Border Roads Organisation (BRO) and the National Highway Authority of India (NHAI) this, in principle, should not be a problem. The only big problem could be land acquisition in North Bengal which is why it is important to have to alternate routes -- the shorter route through Malda and Murshidabad and the other slightly longer route that swings past Sahibganj and Dumka in Jharkhand before coming back through Birbhum. In fact an inland port at Siliguri, which is already a big trading hub, would make matters much easier.

If and when the governments of India and China agree to rebuild and rejuvenate this ancient trade route it would be entirely appropriate to honour it with the names of  Xuanxang, the Chinese pilgrim, who came to the court of Harshavardhan in the 7th century and Atīśa Dīpaṃkara Śrījñāna the famous Buddhist scholar from Bengal whose visit to Tibet in the 11th century is one of the greatest Buddhist legends of Tibet.

To get the ball rolling on the Dīpaṃkara-Xuanzang Transhimalayan Expressway, the first and easiest thing would be to organise a Kolkata to Nathu La car and truck rally. This will not only fire up the excitement and enthusiasm with all stakeholders but will also help us understand the operational challenges involved, at least in the first 800 kms. Will the different chambers of commerce that are headquartered in Kolkata take up this challenge?