The IIT KGP Pre 1993 group in a facebook was created as a reaction and rebuff to the official IIT KGP Alumnus group that had become a hotbed of political and religious bigotry. The Pre 1993 crowd is believed to be more of the "kool kgp type" and even if some of them do have strong views on political and religious matters, such things are kept aside in this group. Posts in this group are more in the form of happy reminiscences that the old men like to tell, listen to and enjoy.

Since it is difficult to search through Facebook posts, I have created these pointers to the stories that I had contributed to this column. But to respect the privacy of the closed group where these stories were pointed, I have made sure that only members can read the whole story -- and the incredible comments that other members have made. 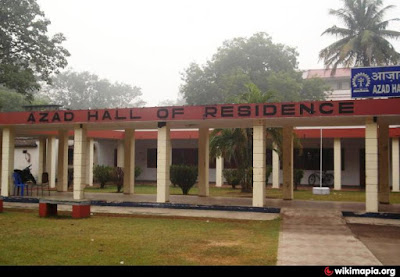 6th July 2015
Sometime in the recent past, Surath Chatterjee, like many of us, reached his 50th year and some of his friends had thrown a party for him at Bali. Unfortunately I could not join him at Bali but my thoughts went back to another birthday party that we in Azad C-Top-West had thrown for him. This might not have been at Bali, but I suppose it was no less spectacular! [ continued here! ]

21 June 2016
This was in our third or fourth year, 1982 or 1983 and even the names of the co-conspirators is fading out. It was the night of the Vishwakarma Puja, that heralds the start of the festive season in Bengal. Some of us from Azad, C-top West had visited Salua / Prembazar end of the campus for a shot of Mahua and on the way back we decided to stop by the various Vishwakarma puja pandels that had sprouted around the campus. The farthest one was the one at the Workshop and we decided to go there .. and on the way of course was the dark and ghostly structure of the Old Building. We had heard of the ghosts of the freedom fighters who were martyred there but that we did not really care. What we were really worried about was the security staff because we had decided -- on the spur of the moment and under the influence of Madam M -- to climb to the top of Old Tower! [ continued here!]