Science fiction writers and movie makers have long talked about robots evolving to the point of dominating the world and human society. Fortunately this has not yet happened and the possibility of it happening in the near future is quite low. On the other hand, machine generated mass mail -- spam -- has increased to a point where they constitute 98% of the total email ecosystem and can dominate and destroy this very useful service unless one takes special care to keep them at bay. Social bots are an emerging phenomenon that may climb out of the success seen with spams in email and reach out towards what what was considered impossible -- the domination of real human ecosystem. 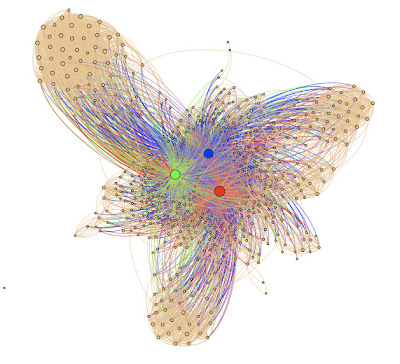 A bot by itself is no big news. Bot -- an abbreviation for a software robot -- is a computer program that imitates human behaviour in certain circumstances. For example you can create a bot, a searchbot, to search the web and report on the best prices for a particular product across various online stores. This mimics the human behaviour of personally visiting the same websites and comparing prices. A more intelligent bot is a chatbot that respond to messages sent to it by a human being in a manner that resembles the response behaviour of a real person. A chat bot is implemented as a piece of software that has been programmed with an "artificial intelligence" algorithm that allows it to carry out a reasonably 'intelligent' human-like conversation. Obviously if the domain of discussion is restricted -- say to the process of trouble shooting in a specific product or assistance with the performance of a simple task  -- this algorithmic approach is reasonably successful. However if the domain of discussion is expanded to the entire gamut of thoughts and ideas that can occur to a human being, the program generally falters and is unable to carry on a meaningful conversation. In fact the Turing Test for the existence of artificial intelligence in a black box ( hardware + software ) is the ability for the box to carry on a conversation to the point where its responses are indistinguishable from that of real human being. As of now, no known device has passed the Turing Test. You can see my chatbot in action if you visit this link.

While a chatbot is designed for 1-to-1 conversation a socialbot is an extension that attempts simultaneous 1-to-many conversations. An email is a one-way communication and spams are emails created by spambots and sent to human recipients. An Instant Message (IM) is a 1-to-1 but two-way communication  and a chatbot uses IM, or equivalent, technology to converse with a human being. A social media platform like Twitter, Facebook or Linkedin is an extension of email and IM because it allows two-way communication between 1-to-many or many-to-many individual -- thorough posts, replies and comments that are visible to all participants. A socialbot is to social media what chatbots are to IM and spambots are to email. A socialbot is a piece of software that interacts with a social media platform and mimics the behaviour of a human being -- by posting comments and replying to the posts and comments of others. Obviously it is programmed with the same kind of  'artificial intelligence' algorithms that is similar to that used in a chatbot but perhaps with a higher degree of sophistication.

Do socialbots exist ? Yes ! The Web Ecology Project has recently run a competition to design a socialbot and the results achieved by the three competing teams are given here. The objective given to each team was to design a program that will sit in the Twitter network and follow and be-followed-by human users and elicit responses by sending tweets. Please read the original posts to see the amazing quality of interactions that were actually achieved. So socialbots are something that is do-able, here and now and can only increase in sophistication and complexity.

What does this mean in the context of social media platforms ?

First this means that when a human being -- that is me and you, assuming that this post is being read by a human and not a searchbot ! -- gets a friend request on Facebook or Linkedin, it does not automatically mean that the request is coming from another human being ! And if you accept it, then you may be picking up a socialbot as your "friend". In Twitter, if someone starts to follow you, and you decide to follow back, you may be following a socialbot, not a human being.

Which immediately opens up the possibility of commercial exploitation ! If you are following, or is a friend of a socialbot, then  the posts made by the socialbot starts showing up on your wall and this is very similar to spam mail landing in your inbox ! So all the spam filters that you -- and your mail provider -- has installed get bypassed immediately and you are again receiving communication that  you never wanted. But now  you are getting it on Facebook, Twitter and Linkedin -- platforms that you believe are more trustworthy. Of course if you find a particular "friend" -- whether human or socialbot-disguised-as-a-human -- to be irritating you can always unfriend him or  her .. but that is one more headache.

But just as spam mail has overwhelmed email to the point of constituting 98% of all mails sent, these socialbots can also overwhelm the social media platforms unless the platform owners can take preventive measures to identify and shutdown socialbots -- but this is a cat and mouse game. Socialbot builders will always try to be one step ahead in trying to outwit social media platform operators who try to identify and block out socialbots !

Another possibility is that socialbots finally pass the Turing Test, become digitally indistinguishable from human beings and so cannot be identified and controlled by platform owners. Next they replicate -- like software viruses -- and proliferate across the social media platform until the number of socialbots is equal to or larger than the number of human beings. At this point, or even earlier, socialbots can start interacting with other socialbots and since they would always be much quicker than human, the conversations between socialbots can increase exponentially and drown all human conversations -- the possibilities are endless and the consequences could be fascinating !

Will human beings retain their ability to use social media effectively ? Or will socialbots rule the world -- or at least the digital world of social media !
Posted by Calcutta at 2:03 pm

Hmm it appears like your site ate my first comment (it was super long) so I
guess I'll just sum it up what I submitted and say, I'm thoroughly enjoying
your blog. I too am an aspiring blog blogger but I'm still new to the whole
thing.Do you have any helpful hints for inexperienced bloog writers?
I'd really appreciate it.