Whether it is really true or not, Twitter has often been accused, often in anecdotal terms, as being biased towards the “Left-Liberal” edge of the political spectrum. This point of view got a boost when Elon Musk launched a hostile take-over bid of the company under the banner of free-speech and a whole bunch of self declared Left-Libs claimed that they would leave Twitter and move to Instagram if and when Elon Musk takes over. Now that the Board of Twitter has capitulated and accepted Musk’s offer, it is time to explore how this issue of censorship and free-speech will be addressed. Musk has of course tweeted that even his most severe critics will be allowed on the platform but opinion is divided on his real commitment. Will he be fair?

The answer to that question lies in the womb of futurity but in the meanwhile, let us explore an alternative approach to ensure free speech. We are looking for something that eliminates or reduces the discretionary power of human beings, the so-called fact-checkers, to either promote or ban individuals or their posts. A naive answer would be to make this decision totally algorithmic so that all decisions can be taken by computer system. This is naive because the algorithm will use certain definitions -- of hate speech, of violence, of falsehood and so on -- that will be created by individuals or groups appointed and paid by the company. This will instantly weaken, or even destroy, claims of independence. However much Musk tries to establish and demonstrate the independence of this group, there will always be grounds of suspicion, even if it were to be baseless. Whoever is blocked will claim vendetta. 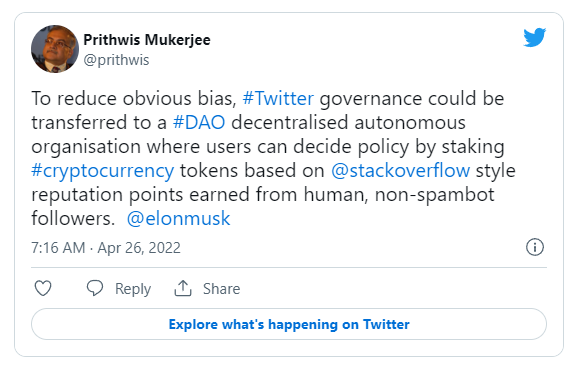 A possible alternative to overt human interference in the governance process is the DAO or decentralised  autonomous organisation. The original DAO -- and a rather primitive one -- is of course the Bitcoin blockchain that has been running ever since the mysterious Satoshi Nakamoto started it and then disappeared from view. The cleverness of this DAO lies in its ability to establish the equivalence of the labour of validating transactions ( or the CPU-effort of mining) into sweat equity ( or bitcoins ‘mined’ as rewards) in the organisation’s ever increasing market capitalisation. Using this principle, many other types of DAO are possible where instead of validating transactions, the focus is on voting on decisions and policies and the validity of the vote is based on proof of stake and not the ruinously energy intensive proof of work. Decisions are arrived at through an autonomous voting process where members of the organisation who wish to participate in a specific decision, stake crypto-tokens for or against the decision.

But for such a DAO to work, there must be a supply of crypto-tokens. Many crypto-currency DAOs use the mining process to generate the crypto tokens which are then traded by users and eventually used as stakes in the decision making process. But such a process can lead to the concentration  of a large number of tokens with a few members, the so called crypto-whales, who can then hijack the decision making process on the basis of their ‘wealth’ that they can stake in each decision.

A better way to distribute tokens among genuine users is to follow the mechanism used in Stackoverflow -- a popular social media platform for programmers -- to award reputation points. New members have no reputation points, but they can acquire points by asking good questions ( in the case of Twitter, make good posts) that are upvoted by older members who have crossed certain thresholds in terms of badges earned. More points can be acquired by providing helpful answers that are appreciated by others ( in the case of Twitter, ‘liked’ or ‘re-tweeted’ by verified, non-spambot users). In fact, Stackoverflow has built up a comprehensive reputation management mechanism that has been successful in fostering and maintaining a very friendly and cordial environment. Obviously there are no divisive issues like politics and religion in Stackoverflow to muddy the cordiality but nevertheless, its reputation management model can be used as a basis for creating a similar mechanism in Twitter.

Once this is in place and we have a way to distribute reputation points to users,  these reputation points can be used as crypto-tokens that can be staked in governance decisions. This will make Twitter a platform that is truly public in spirit -- like a town square -- even though its legal ownership remains private in the hands of Elon Musk or anyone else.