I recently saw two movies on Indian mathematicians, the first on Shakuntala Devi and the second -- The Man Who Knew Infinity -- on Srinivas Ramanujan. Obviously both these mathematicians are very well known in India and to a certain extent, or in certain circles, in the world as well. Both Shakuntala Devi and Ramanujan seemed to have magical or supernatural abilities to see or visualize solutions to mathematical problems. Of course, Ramanujan was several orders of magnitude higher than Shakuntala. His work on Number Theory, -- the Queen of Mathematics ( where Mathematics is the Queen of the Sciences) -- was vastly more significant or exciting compared to the mere complexity of arithmetic computations that Shakuntala could demonstrate. But then, if Shakuntala had not been deprived of her childhood and childhood schooling by her avaricious father, who made Shakuntala earn money for the family, she might have had the opportunity to demonstrate more significant abilities. 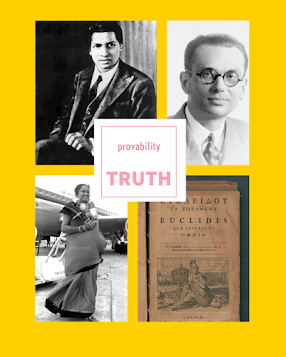 But we are not here to compare Shakuntala or Ramanujan. I see them as the Rishis, or savants, of ancient India who could visualize the truth. That is why in India, we use the word darshan when we talk about subjects that Europeans refer to as philosophy. Literally, darshan means vision or sight. Metaphorically, it means insight born out of intuition. India's rishis or savants could see the truth, or as it is said, they could hear it directly from its source.  Which is why the Veds are referred to as shruti, or that which has been directly heard, as opposed to the subsequent literature smriti, or literature that is  remembered from an earlier era.

The ability to see the truth in darshan or to hear the same as a shruti is a fundamental feature of the Indic spiritual ethos and is the basis of all intellectual enquiry in Hindu India. Hindu savants who could see or hear great philosophical and scientific truths were treated with reverence and viewed with respect if not awe. In contrast, the European worldview is based, among other things, on the method of proofs that were codified by Euclid of Alexandria and known to the common man as Euclidean geometry. But Euclid is more than just geometry. Unlike Vedic mathematics which is more of a collection of mathematical aphorisms, Euclidean mathematics starts from a foundation of self-evident axioms and then builds a self supporting superstructure of theorems that are connected with beams of irrefutable logic. The strength and beauty of this approach is that even though Euclid applied it to geometry, it has been adopted by the European academic establishment not just in the pristine precincts of Mathematics but even in the more rough and tumble world of the physical, biological and now even in the social sciences. Net-net the proofs provide the necessary rigour that, in the European mind, separates the grain of truth from the chaff of anecdotes and hearsay.

This is where savants like Ramanujan ( and Shakuntala) collide with the modern -- largely European and American -- world of mathematics. Ramanujan never, or rarely, had a proof for his conjectures. He claimed that his family goddess Namgiri, a local avatar of the Divine Feminine Mahalakshmi, would tell him the equations and they could not but be true because they had been revealed by the Devi herself. To his dying day, and he died very young at the age of 32 after battling tuberculosis that he had developed in the cold weather of England, Ramanujan claimed, that to him, an equation had no value unless it expressed a thought of God.

This was of course heresy to mathematicians like Hardy and Littlewood who had a great fondness for Ramanujan and had arranged for him to join them at Cambridge. For Hardy and his tribe,  a statement without a proof was a mere conjecture, an intellectual oddity, but not something that could be accepted as an intellectual achievement. After a lot of persuasion, that included quite a few unfortunately harsh words, Hardy could compel Ramanujan to develop proofs of some of his numerous conjectures. Fortunately, this was enough, first for the Royal Society and then Cambridge University to accept him as Fellow. Ramanujan was the second Indian to be elected as Fellow of the Royal Society.

Ramanujan died in 1920, and you will have to see the movie to know how and why he died so young, but had he lived for another ten years he would have heard Kurt Gödel presenting an usual paper in Vienna where he claimed that mathematics ( or rather arithmetic, the most primordial part of mathematics) in incomplete.  Gödel Theorem of Incompleteness showed that if a formal, logical system is consistent, then it cannot be complete. This means that there will be statements that are true but not provable by logically connecting them to established theorems. Moreover the consistency of axioms cannot be proved within the system. A simple analogy would be to consider the following sentence : "This statement is false." If you think about it, there is no way to determine the whether the statement is true or false!

Ramanujan was of course deeply immersed in Number Theory and his numerous conjectures -- statement that are true but not yet proven -- were precisely the kind of statements whose existence was established by Gödel in his Theorems of Incompleteness. Pushed by Hardy, Ramanujan did publish 28 peer-reviewed papers in the last six years of his short life but he has left behind more than 3500 conjectures that are available in his notebooks that were subsequently published or printed by Springer Verlag many years later. These notebooks are the frantic efforts of a man to capture and preserve for posterity the thoughts of "God "that he could see as beautiful equations.  These beautiful equations are possibly no less profound than the shloks of the RigVed but only to one who has the ability to understand or rather appreciate them. It is a different matter of course, that Bruce Berndt, Professor of Mathematics at the University of Illinois at Urbana Champaign, eventually proved almost all these 3500 odd conjectures or theorems that Ramanujan left in his notebooks. See this interview and this paper.

Gödel's Theorem establishes that there are statements that are true but not provable and so provability is a weaker notion than truth. Absence of a proof does not weaken the value of a true statement. In a sense the Incompleteness Theorem puts a closure, a boundary, to Ramanujan's premise that a proof is not really important in the search of the truth. If it is there, then that is nice. If not, so be it. There is no reason to disbelieve or devalue what has been revealed just because there is no proof.

It may of course be argued that Gödel's Theorem is applicable only in the domain of mathematics and that too within the narrow confines of arithmetic. Extrapolating it into the domain of mysticism and religion is incorrect. In a strict sense, that may be true, but nevertheless it opens up a crack in the otherwise impenetrable wall of hard logic that keeps mysticism away from 'scientific' or rational enquiry. But this crack gives an indication, a hint, that logic and rationality are not as sacrosanct as they are made out to be. Even if a field as structured and as logically tractable as arithmetic cannot be accommodated and captured with the tools of logic then it is even more unlikely that a subject as complex and nuanced as religion can ever be understood or explained in logical and rational terms. There is nothing to be apologetic about accepting the limits of logic and rationality.

Ramanujan's genius is beyond doubt. Had he simply proved these theorems he would have been just another great mathematician. What is far more interesting however is his ( and Shakuntala Devi's ) ability to transcend the process of proving truths -- like mere mortals -- and jump straight through to the eventual truth of a statement. Not only does this provide a practical demonstration of Gödel's Theorem of Incompleteness but is an endorsement, a contemporary reaffirmation, of the process through which Hindu savants had a darshan or vision of the Truth. The shruti literature of the Veds and the Upanishads encode Truths that were directly envisioned by Hindu savants and that is why we hold so dear today.

I end by quoting Rabindranath Tagore

that can be loosely translated as - "It is so very pleasing to experience the epiphany of the infinite when it manifests itself within the finite domain of my own limited psyche."

P.S. I have been told that even though all this sounds kind of plausible, true scientists will never be convinced to accept the core idea of this post. Frankly, I am not here to convince anyone. I am here to state my point of view that others may or may not agree with.
Posted by Prithwis at 9:42 am