Rise of the digital autonomous corporation


Think of a company that offers a service that helps people track their assets and transfer the same to others on the basis of validated instructions -- similar to a current account with cheque facility. Think of the same company as hiring people to do this and paying them for their effort with shares in the company -- sweat equity. Think of this company as being in operation since 2009 and the value of its shares spiking to US$ 1200 before stabilising at around US$ 200 over the past two years. Think of this company having a current market capitalisation of around US$ 5.5 billion.

Now what if this company were to have to no human managers and but only programs on multiple computers interacting with each other!  Is such an unmanaged company possible? Strangely enough, it is possible, it does exist today and it is called Bitcoin. The only twist in the the tale is that the only asset being tracked by the company also happens to be the shares in the same company, that is Bitcoins!

Bitcoin, that hit the headlines in 2013 when its price surged to US$ 1200 in international markets, has been viewed, and promoted, as a new kind of currency called cryptocurrency. Thanks to its features that guarantee anonymity, it was quickly adopted by the underworld and used in massive cross-border, illegal transactions until regulators caught on and imposed strict KYC norms. After the regulatory shake-up, it is now viewed and legally treated as any other  commodity, like gold or crude oil.

The commodity analogy is reinforced by the name, mining, given to the process that regulates the creation of new Bitcoins and their entry into the economy. But this association is misleading. The actual goal of the process is to validate asset transfer - to check whether the transferor owns the asset and is entitled to transfer it to the transferee as per the conditions under which the transferor acquired the asset. This process is labour intensive, or rather CPU intensive, and so the entity, or computer, that carries out the validation is rewarded with a few units of the asset as an incentive. Hence the mining process that generates a reward is actually a by-product of the validation process that is essential for the success of the original book-keeping service that was on offer.

The genius of Satoshi Nakamoto, the anonymous creator of Bitcoin, lies in establishing the equivalence between (a) the validation process and the reward process  and (b) the asset under management to the equity of the company itself. He then built the software that does all this and released it into the public domain in 2009 and since then it has been running on multiple computers connected in a peer-to-peer network. The software running on these machines is controlled by humans but the resultant entity or phenomenon, the network of peer-to-peer nodes is independent of any specific node. Its existence and the validation service that it delivers is an emergent phenomenon that (a) depends on the existence of multiple nodes that adhere to the bitcoin protocol of data exchange and yet (b) is independent of the existence of any specific node. This is where Bitcoin transcends its earlier identification by being neither a cryptocurrency nor a commodity but becomes instead, a digital autonomous organisation (DAO).

But how does all this really work? The mathematics behind this is rather cumbersome, to say the least, but it has been tested by the best minds in academia and industry and there is complete consensus that this is no scam. As an analogy, consider Einstein’s General Theory of Relativity that has been in the limelight because its spectacular prediction of gravitational waves was recently validated by scientists. None of us really understand the mathematics behind relativity but we are confident that had it been erroneous, the scientists whom we trust would have exposed the flaw. So is the case with the bitcoin network. Cryptography, the mathematics behind bitcoin, ensures that not only is the value of the assets under management preserved but the cost of any effort to subvert or defraud the network is far higher than the asset value that can be obtained through the subversion! Hence there is an economic motive for everyone in the network to make sure that the system continues to operate as designed and that is why the system has been working smoothly since 2009. In fact, this is true for any society of rational humans where a stability, or rule of law, is ensured when the cost of breaking the law is higher than the benefits that accrue by breaking the law.

If  bitcoin is indeed a digital autonomous corporation then the corporate office that it works out of is the blockchain. Blockchain is the underlying technology platform and bitcoin is just one of any number of DAOs that can operate on it. This is similar to the Internet, a hardware platform of networked computers based on the TCP/IP protocol, that supports many applications of which, only one is the well known http-based World Wide Web. In fact if the blockchain is in place, creating a DAO like bitcoin is not difficult and many alternate DAOs ( or alternate coins) exist though none has reached the level of popularity or market capitalisation as bitcoin. In fact, Ethereum has created an open, publicly accessible blockchain and the Mist browser that makes the creation of DAOs so simple that the author created and deployed indiCoin, a bitcoin lookalike that is just as robust but a little less sophisticated, in less than thirty minutes. 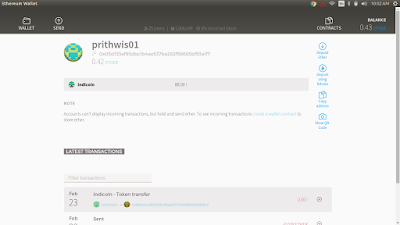 The blockchain is a public ledger or record of asset transfers that is both visible to all members of the network and yet guarantees anonymity of ownership. This incredible property of the blockchain is of immense interest of those who deal with publicly traded securities in global financial markets.

In January 2016, DTCC, the world’s largest central securities depository, the US version of India’s NSDL and CDSL, has floated a white paper,  stating that the blockchain offers a “a once-in-a-generation opportunity to reimagine and modernise its infrastructure” for trading of securities in the US. The change in the way financial securities can be stored and transferred is being compared to the change from physical securities to dematerialized securities that occurred in the 1970s in the US and in the 1990s in India. The staggering implication of this new way of dealing with securities will be explored in a symposium on the blockchain that the DTCC is organising in New York on March 29, 2016.

In a parallel development, the US Securities and Exchanges Commission has, in December 2016, given formal approval to Overstock [Nasdaq OSTK] to formally list its new equity shares on an “alternate trading platform”. Patric Byrne, Overstock’s visionary CEO, had, in June 2015 already floated private corporate bonds for qualified institutional investors on a blockchain based trading platform that they have created and it is widely expected that the equity shares will be released there as well. This, read along with DTCC’s strong interest in the blockchain means that there is a strong possibility that securities trading will move into the same blockchain environment that is currently being used to trade bitcoins.

Whether it is with bitcoins, equity shares or any other tradeable asset, the power of the blockchain lies in its ability to create mathematically enforceable smart contracts. Contracts are fundamental to any process that transfers ownership of assets and the idea of a smart contract was created by Nick Szabo (who was erroneously thought to be Satoshi Nakamoto, until he denied it) in 1997. Controlled by cryptographic keys owned by buyers, sellers, lenders, mortgage owners and anyone who could have an interest in an asset, smart contracts can be triggered by events like presentation of a key, receipt of money, the passage of time or by other contracts. For example the ignition  of a car’s engine that normally responds to the owner’s cryptographic key can instead respond only to the banker’s cryptographic key if mortgage payments are not paid in time. And in the case of cryptocurrency like bitcoin, a payment contract can be executed if and only if a previous receipt contract (or incoming transaction) can be activated. Similarly, smart contracts can be created where multiple signatures (or cryptographic keys) are needed to transfer an asset or to ensure that an asset cannot be transferred until certain escrow conditions are met -- and no human beings are needed to verify any of these conditions because they are all programmatically coded into the contract using the blockchain protocol.

The internet transformed communications by making exchange of information inexpensive, secure, decentralized and democratic. Similarly, the blockchain could transform finance by making it just as easy to exchange digitised assets. By linking assets like shares, bonds mortgages with cryptocurrencies through smart contracts, blockchain technology could convert the world of financial services into one gigantic digital autonomous organisation that is as resilient, robust and reliable as the World Wide Web.
This article originally appeared in Swarajya, the magazine that reads India right