Ever since I was a child growing up in Calcutta the advent of upcountry pilgrims for the Ganga Sagar Fair was an annual event. Every year, on the occasion of Makar Sankranti, when the Sun transits from Dhanu (Sagitarrius) to Makar (Capricorn), bus and train loads of pilgrims, mostly from Uttar Pradesh and Bihar, would descend on Calcutta and then head out towards Diamond Harbour and Sagar Island where the Ganga ( or Bhagirathi) river finally empties itself into the Bay of Bengal. The ashram and temple of Kapil Muni is the epicentre of a gigantic mela where 30,00,000 people gather to seek the blessings of Kapil Muni, Raja Sagar ( please note, this is NOT pronounced as Saagar, no long aa after S) and Raja Bhagirath, the king who "brought" the Ganga to this point. For the Bengali population of Calcutta, the Ganga Sagar Mela was never a big event and even if we had thought of visiting the place, the chaos that is traditionally associated with the event -- when 3 million people descend for a day in a tiny village -- was a big put-off. But this year, we decided to go a month before the event -- before the village is run over by a herd of unruly elephants -- and see for ourselves what is that draws so many people here. The blue dot in the screen capture from the Google Maps on my Android phone shows you where we were  ... 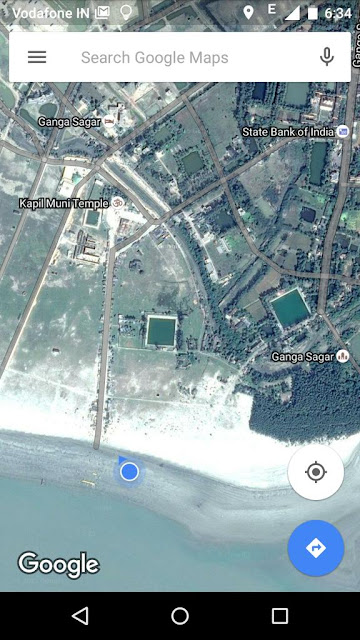 Please note the straight road from the Kapil Muni temple to the beach and the two fields on either side. That is where you would find 2 million people on the night prior to Makar Sankranti, all waiting for the sun to rise and then run into the sea for the traditional bath. (The other 1 million is scattered around the island!) But what is it that draws so many people here? Let us, very briefly, look at the myths associated with Ganga Sagar.

The story of Ganga Sagar is set before the Mahabharat era ( Dwapar Yuga) and before even the Ramayana era (Treta Yuga ) in the heart of Satya Yuga when the foundations of the Sanatan Dharma of India were being laid down. Sage Kapil is the founder and chief exponent of the Saankhya School of philosophy, one of the six canonical schools of Indian philosophy, and is said to be an avatar of Narayan. This spot is where he meditated upon the mysteries of the universe and came out with his dualistic interpretation of the Purusha and the Prakriti. Why did he come here? Because he was tired of the hustle and bustle of city life (imagine him in Delhi today!) and wanted the peace of the underworld for his contemplation. This was as far away from the towns of Aryavarta as one could be ... and so he came here for the peace and tranquility. [ Little knowing that 3 million people will follow him here, but that is thousands of years later!]

Next, let us locate Sagar, a king of Ayodhya and a direct ancestor of Rama, who survived an assassination attempt when he was still in his mother's womb. Thanks to divine intervention, he was born inspite of the poison [gar] that was inserted into his mother's womb and hence he was known as S+Gar. Subsequently he performed the Ashwmedha Yagna but, after a lot of fancy events, his horse was found tied up in Kapil Muni's ashram. S'gars sons harangued the sage when he was in deep meditation and then insulted him as a result of which they were all burnt to ashes in his wrath. Subsequently another, more prudent son of S'gar, managed to extricate the horse and helped his father complete the Yagna but there was no way to bring the dead brothers back to life. Kapil being an otherwise reasonable man suggested that if S'gar or his family members could bring the waters of the living Ganga to the Ashram, where the ashes were kept, then all the sins of the boys would be washed away and they will be born again in a new life.

S'gar and his son failed to persuade Ganga to leave the pleasant environs of the heavenly Himalayas and travel to the underworld where Kapil's ashram was. However, one of his descendants, Bhagirath, managed to lure the Lady Ganga out of the mountains, led her across the Aryavarta -- with the alluring sound of his conch shell -- all the way to Kapil's ashram on the Bay of Bengal, washed away the sin from the ashes of his ancestors and gave them a new life.

That is why even today, people from the region of Ayodhya -- and by extension, large parts of Uttar Pradesh and Bihar -- converge at Ganga Sagar, where the river meets the sea and take a  bath to wash away their sins and start a new life. You may smirk at the story of washing away one's sins but this belief has been around for thousands of years. In the Mahabharat, the five Pandava brothers are said to have bathed in Ganga Sagar to wash away their sins as well.

As a tourist spot, Ganga Sagar is no different from any other beach in the Bay of Bengal. You could go to Bakkhali or Digha or Shankarpur where tourist facilities are far better and more well organised. 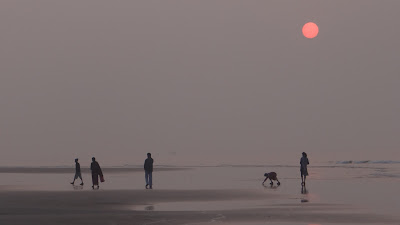 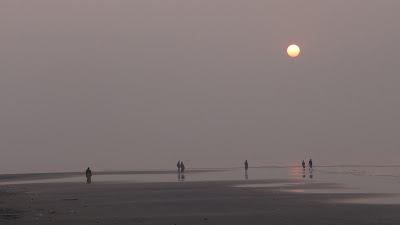 This is sun rise as seen from the "blue dot" on the Google Map screen capture. 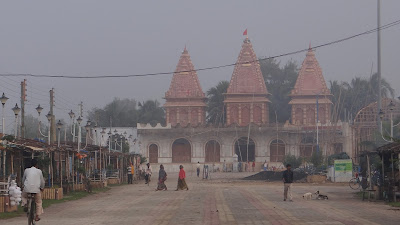 Here is the temple, which is quite recent. The old temples have been washed away and only the legends remain. 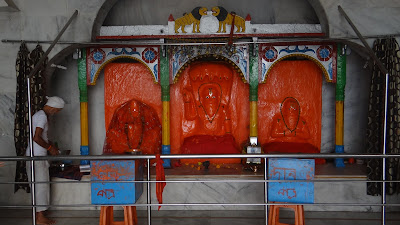 Inside the temple, that is lovingly maintained by sadhus from Ayodhya, you will find images of Kapil (centre), S'gar (right) and Ganga (left) cradling Bhagirathi on her lap.

While we are familiar with the rigours of pilgrimage in the Himalayas, Ganga Sagar was no less difficult. The river is infested with crocodiles while the river currents, whirlpools and the cyclonic weather of the Bay of Bengal is treacherous. Plus there are  ( or used to be) tigers on land and snakes in every tree. Altogether a very difficult place to reach. Bankimchandra's novel Kapalkundala and Rabindranath Tagore's tragic poem, Debatar Graash are both set in this locale.

Today, things are better. One can drive down to Kakdwip and get a ferry from Harwood's Point ( also known as Lot 8 for some unknown reason) The LCT ferry is supposed to carry cars and truck across to Sagar Island but it rarely operates and one has to leave the car, at a Gram Panchayat parking lot and take a 45 minute passenger ferry to Kochuberia. The highlight of this ferry ride is the large number of sea gulls that accompany the ferry and look out for food that is thrown out by the passengers. 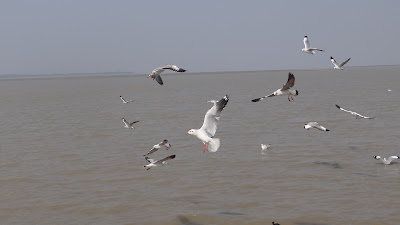 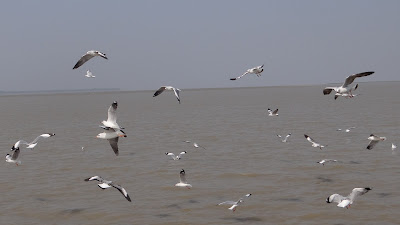 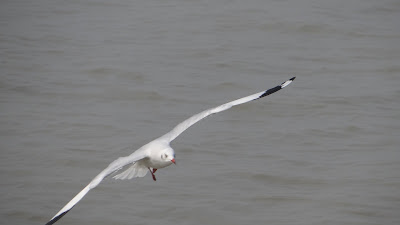 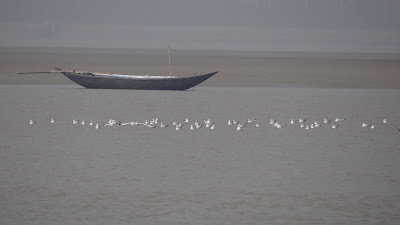 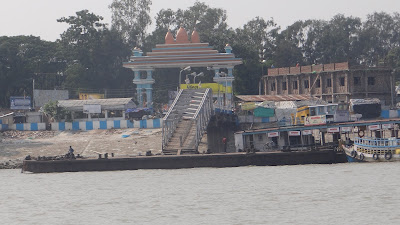 From Kochuberia it is another 35 kms through the island till the you reach the extreme southern tip where the Kapil Muni temple is situated.

There are no hotels in Sagar Island and so, many people take a day trip and do not spend the night there. This is feasible but it is a tragedy because it is only at dusk do you realise the significance and experience the true ambience of the place. There are many Ashrams and at each Ashram when the evening devotions begin, the arati starts and the soft hymns float through the gathering dusk you feel that you are being a transported into a different world. Of course this is not equally applicable to everyone and some of you may feel bored with nothing to do. But if you wish to get a glimpse, a feel of the sanatan dharma of Hindustan you may wish to spend a night here.

But if there are no hotels where do  you stay? The West Bengal government has a number of very nice bungalows but to stay there you would need good connections with sarkari people. For the rest of us there are the various Ashrams that, for a small donation, will gladly let you use their guest rooms. These are not hotel class rooms but you will have a bed, mattresses and access to a clean toilet. But you should carry you own towels, soap, mug! and anti-mosquito gear. Unless you land up bang in the middle of the fair, that is Jan 15 plus or minus 10 days, then getting a place to stay is not a problem. You will always get a place to stay. However the best and most well organised Ashram is the one run by the Bharat Sevasram Sangha -- they offer rooms with attached baths with western style commodes and fresh, white bed sheets. We offered Rs 500 as donation for a double bedded room and were given rooms adjacent to the one used by the head of the Ashram!

However the best thing about this Ashram is the splendid Arati that is conducted by the head of the Ashram at 8:00 PM. After an hour of music and sermons the powerful Arati-with-arms is performed with great gusto. This was very inspiring. 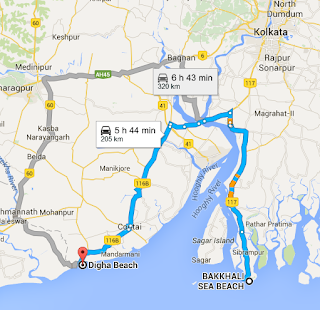 While Sagar should be preserved as a place of pilgrimage, a sea-cruise service between Digha and Bakkhali could be a tourist project worth exploring. People would drive to Digha, spend a night or two there, take the cruise across the estuary of the Ganga, go past Sagar, get off at Bakkhali, spend a night there and return to Calcutta. Or, people could reverse the circuit, go first to Bakkhali, then to Digha and then back to Calcutta again. Such a sea-cruise would perhaps be the only one of its kind in India and should be attractive for domestic and also foreign tourists and generate revenue for South Bengal.
Posted by Prithwis at 10:05 am