Maps of India : DIY with R and GADM data

Displaying spatial data on maps is always interesting but most Visualisation tools do not offer facilities to create maps of India, especially at the state and lower levels. In this post, we will show how such maps can be made.

The base data for such maps, the "polygons" that define the country, the states, the districts and even the talukas ( or sub-divisions) is available from an organisation called Global Administrative Areas or gadm.org. Country level files for almost all countries are available in a variety of formats including R and these are at three different levels. For India, these files can be downloaded as IND_admN.RData where R = 1,2,3. These will form the raw data from which we will create our maps.

Unfortunately, the GADM files represent a truncated Kashmir. How I wish that the Government of India and the National Atlas and Thematic Mapping Organisation would publish similar files for us. Anyway, we work with what we readily have ...

Working with R, we will need two R packages :

Assuming that the downloaded RData file is located in the R working directory, the following code will generate a basic India showing the states 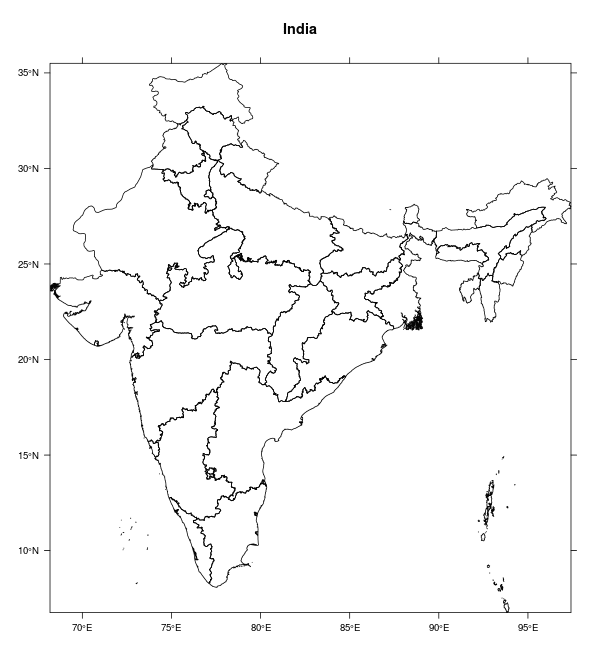 Now suppose there is some data ( economic, demographic or whatever ...) and we wish to colour each state with a colour that represents this data. We simulate this scenario by assigning a random number ( between 0 and 1) to each state and then defining the RGB colour of this region with a very simple function that converts the data into a colour value. [ This idea borrowed from gis.stackexchange ] 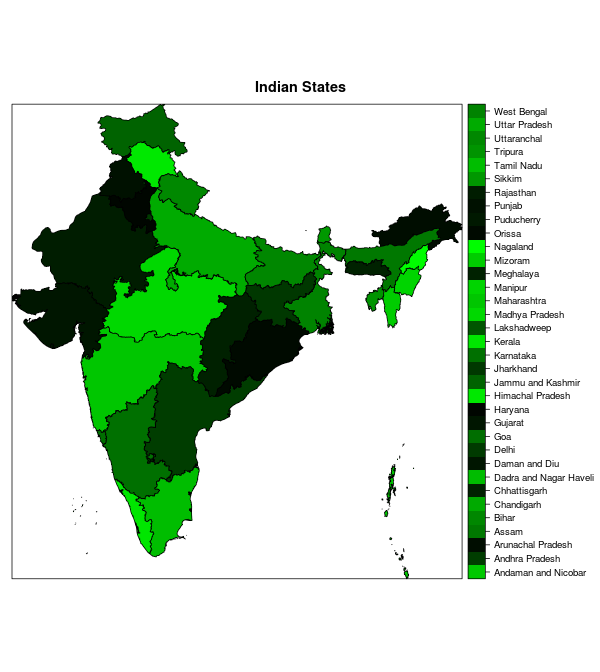 Now let us draw the map of any one state. First check the spelling of each state by listing the states:
ind1$NAME_1 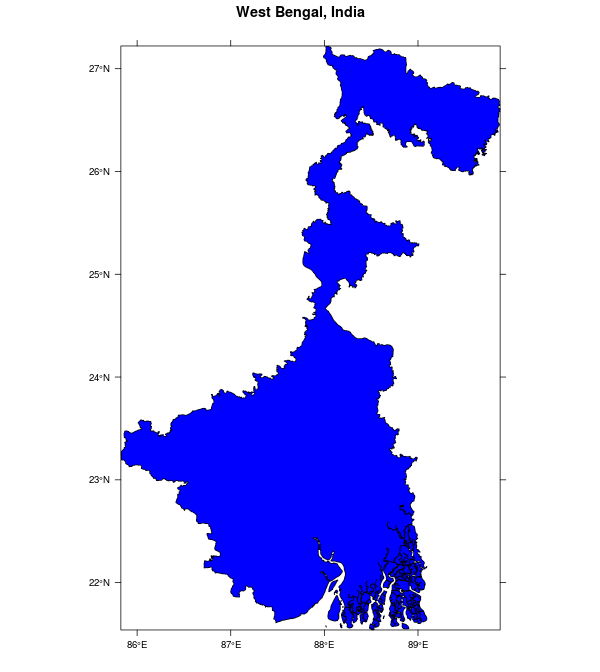 If we want to get and map district level data then we need to use the level 2 data as follows :

and then plot the various districts as 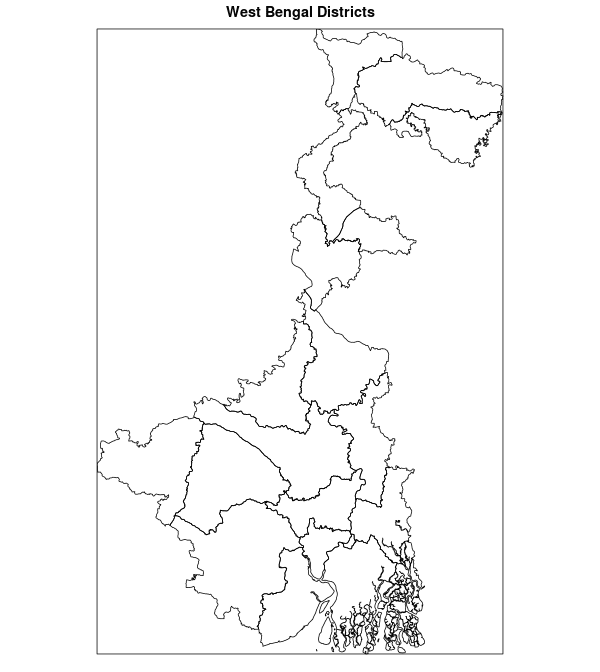 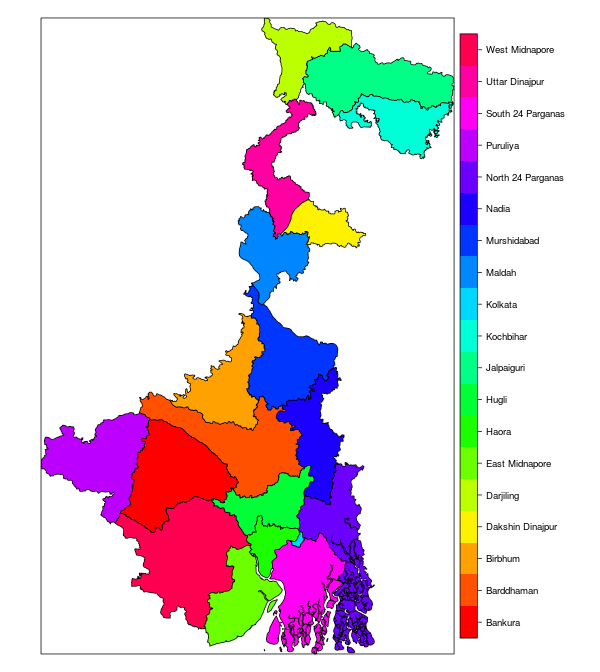 As in the case of the states, we can assume that each district has some (economic or demographic) data and we wish to colour the districts according to the intensity of this data, then we can use the following code : 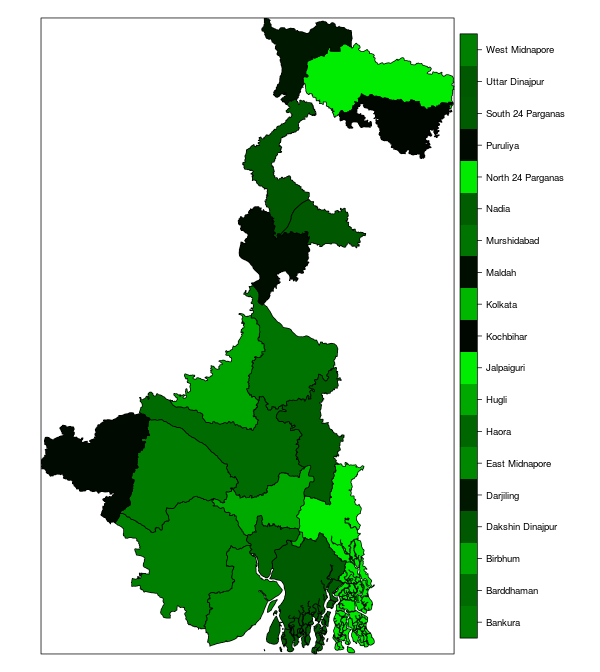 But we can be even more clever by allocating certain shades of colour to certain ranges of data as with this code, adapted from this website 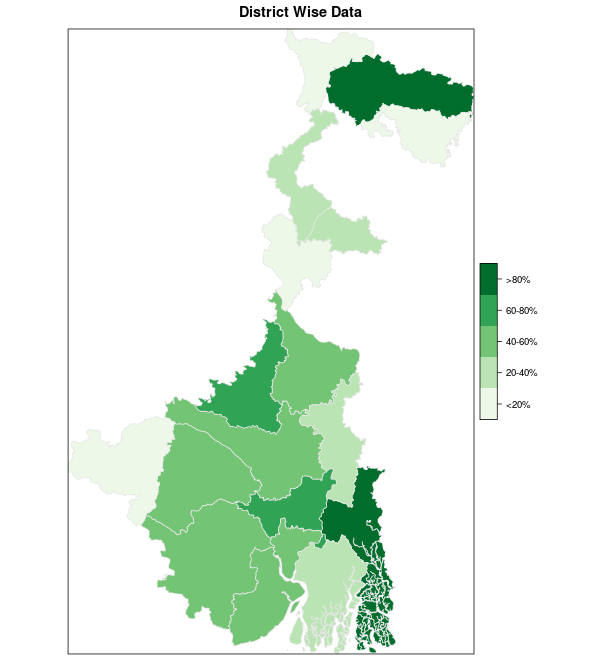 To move to the district, sub-division ( or taluk) level we need to use the level three data file :

and then plot the subdivision or taluk level map as follows : 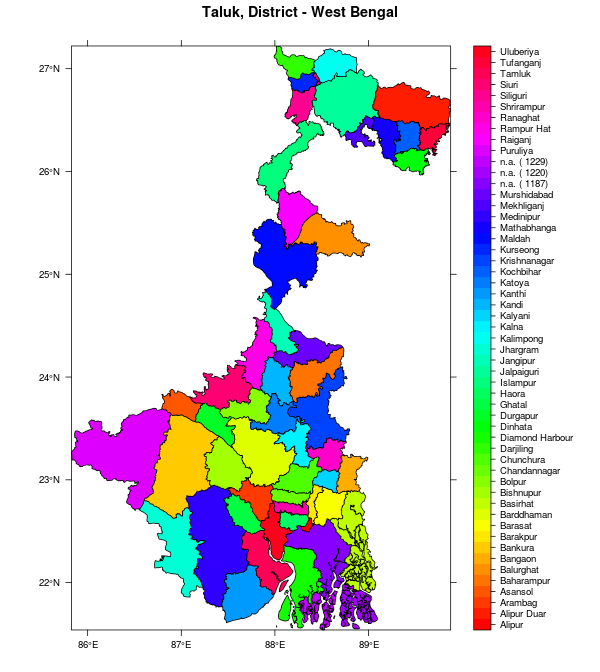 Now let us get a map of the district - North 24 Parganas. Make sure that the name is spelt correctly. 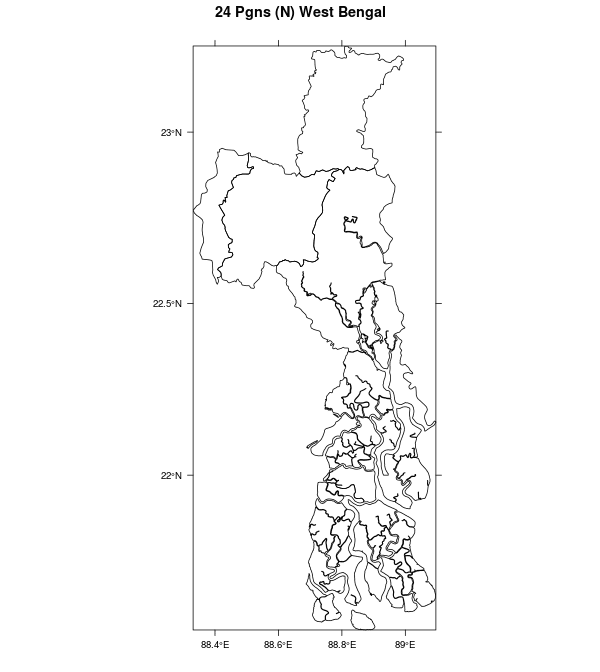 and within North 24 Parganas district, we can go down to the Basirhat Subdivision ( Taluk) and draw the map as follows: 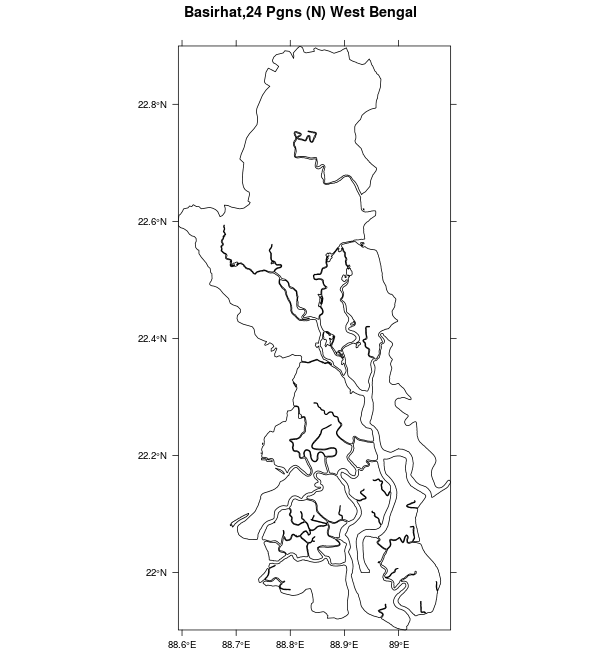 This is the highest resolution ( or lowest administrative division ) that we can go with data from gadm. However even within a map,  one "zoom" into and enlarge an area by specifying the latitude and longitudes of a zoom box as shown here. 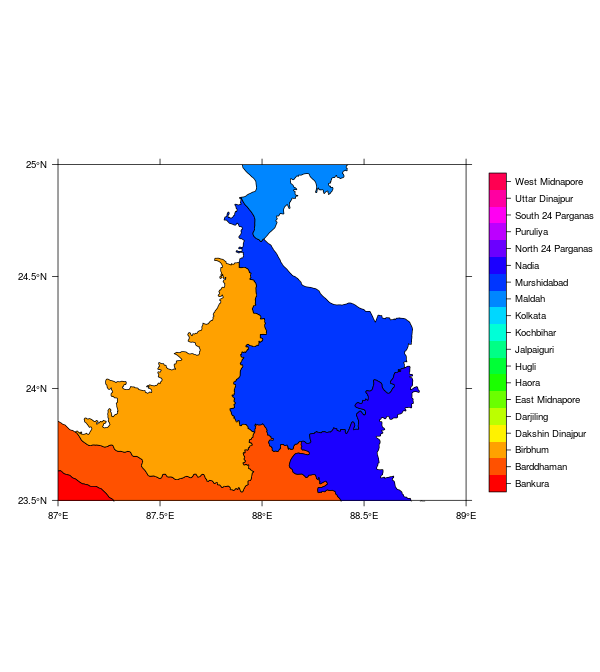 With this it should be possible to draw any map of India. For more comprehensive examples of such maps, please see this page.

new PostScript : The full code for creating this maps as well as additional information on how to place text and markers on these maps is available on my specialist visualisation blog.