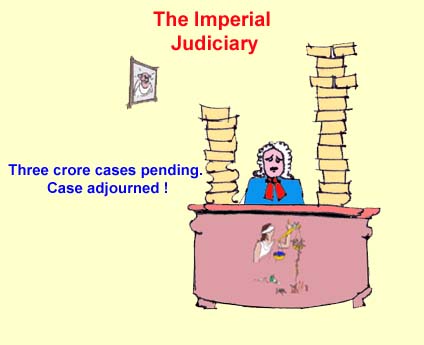 If justice delayed is justice denied then the citizens of India have had no justice for many years. We all know that court cases in India drag on for years while litigants grow old and die or settle out of court. For those who are entangled in criminal cases the situation is worse because more often than not a significant part of their lives are wasted behind the bars of overcrowded jails. One estimate of the size of the problem says that in 2009 there were 30 million court cases pending all over the country. What is worse is that there is no solution in sight !

Let us first redefine the judiciary as a mechanism to deliver judicial services where judges, who are paid by the Indian tax payer, are service providers and the litigants are the customers or consumers. In fact these customers pay for the services either directly through court fees or indirectly through the taxes. The moment we redefine the litigant as a consumer then he is eligible for protection under the Consumer Protection Act that should translate into some kind of a service level guarantee. Today, if my case has been dragging for the past three years there is no way  thatI can ask the court “Why ?” and the court has no obligation to answer me. This is intolerable. The sixth Fundamental Right granted under the Constitution guarantees me the Right to Constitutional Remedies for the enforcement of the other rights and could be redefined to explicitly allow the citizen to question the courts about the delay or deficiency of judicial services.

Next, we need to create a metric for judicial efficiency because what we do not measure, we cannot control. In creating this metric let us begin with a focus on the judges because it is the judge who has the maximum say in the matter of adjournments and dates. Unfortunately many judges believe that they are above all accountability and take many liberties with the system. To check this we need two simple metrics : one for quantity and one for quality. First every judge must be given a target number  of cases to be disposed of --  monthly, quarterly and annually. Inability to meet these targets must be reflected in an annual appraisal process and there could be significant financial incentives for judges to meet and exceed targets.

But this urgency to meet targets might cause judges to simply hear and clear cases without due care and concern about the merits. Hence we need a countervailing quality metric that would keep track of the fate of the judgements passed by a judge in the higher appellate courts. The quality metric could be taken as the ratio of judgments that are upheld to judgements that are overturned on appeal. If a judge in his urgency to meet quantity targets passes bad judgments that are routinely overturned in higher courts then the financial incentive that would become due to him would be reduced drastically.

This approach of “sweating our assets” or making our judges work harder to achieve our goals is good up to a point. After that we need invest in more assets -- have more judges. Adding judges is easy -- there are enough good lawyers in this country who can be interviewed and appointed to the various courts -- and the costs associated with them, salary and incentives, would be an investment that would yield generous returns in terms of quick justice.

But the trouble is where would they sit ? and hold court ? Doubling ( or even tripling ) the number of judges would need double or triple the number of court rooms. That means more expense but what is worse is the time that will be spent on floating tenders, assigning contracts, litigation on award of unfair contracts, land acquisition, construction and so on is tremendous. The judicial transformation project will become a gigantic civil construction project much to the delight of civil contractors but of little use to the litigant.

Instead, let us have the courts operate in two or three shifts ? Most production companies use their productive assets across the entire 24 hour cycle by having three sets of workers and there is no reason why our judicial system cannot work in three shifts as well. In any case no judge is ever present in court premises for more than 8 hours -- actually far less -- and so accommodating multiple sets of judges on the same premises would not be a problem. Having the courts operate at night may be an alien concept for the Indian judicial system but there have been suggestion and requests in this regard for quite some time and no one has yet come out with any reason why it is not possible.

There can be a night shift allowance for judges and there can be a rotation of shifts so that one judge does not have to work every night -- these are matters of detail that have been adequately addressed in thousands of companies in the country. What is even better is that there will be an appropriate utilisation of the bloated and unproductive non-judicial staff in the courts. Today there is an army of peons and clerks who do little work but cannot be fired because they are the highly protected government employees. But deploying them on rotating shifts should be easier and will lead to better utilisation. Once again we are “sweating our assets” -- the physical infrastructure and the support system -- to derive more benefit from what we already have.

This two-pronged approach should lead to a significant increase in the throughput of court cases through the system. But for this approach to work, our judges must accept that they are not divine creatures, to he held in awe and reverence by the litigants, dispensing nebulous justice  and operating beyond the pale of accountability. Judges must remember that they are nothing more than service providers paid by the public to pass decisions that are enforced by the executive and like any other service provider they must provide service level guarantees on the services that they provide.

Email ThisBlogThis!Share to TwitterShare to FacebookShare to Pinterest
Labels: government