Sweating Our Assets in the Higher Education Sector

The Higher Education sector in India has been the subject of much attention, heartburn and soul searching in the public and private media. We know that India with her vast pool of young citizens is ready to reap the economic benefits of the demographic dividend because both the West -- Europe and North America -- and China is plagued with an ageing population. But somehow or other have not yet found a sustainable and scalable way to train our youth and enable them to acquire the skills that are badly needed for economic success. Currently the debate and attention is focussed on two areas. First (a) how should the government set up new schools and colleges, for example new IITs, new IISERs and second (b) In what way should the private sector be engaged in a manner that regulates the balance between the entrepreneurship of private providers vis-a-vis the rapacious exploitation of innocent students. In this two pronged debate, let us introduce a third perspective namely, how can the existing network of government colleges -- which is indeed a vast network -- be upgraded to support the growing aspirations of the nation. 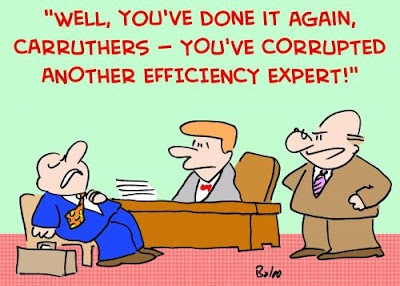 While existing government colleges -- starting from the exalted IITs down to the humble district colleges -- continue to teach a large number of students, the general perception is that they are absolutely worthless. In fact this perception extends to the IITs as well. Not too many people will admit this in public but the likes of Jairam Ramesh and Narayan Murthy have had the guts to say so and there are many others who would agree with them. While it is easy to criticise governement colleges, it is stupid to write them off. After all a lot of  time and public money has been invested in these institutions and it only makes sense to see how to reform them to the point where they can deliver good returns in terms of quality of students. This post explores some of the options that are possible.

The starting premise is that these institutions -- from the IITs downwards -- are grossly inefficient. They have consumed and are still consuming a vast amount of public resources -- money, land etc -- but deliver very little.  The ratio of Output to Input is very low but how do we measure output ? By the number of students ? By the quality of the placements ? By the number of papers published ? While it would have been nice if we could have come out with an unambiguous definition, the fact remains that there is no immediate consensus. So let us park this contentious issue for the moment and focus on the means, not the ends. Can we explore some abstract principles that lie beneath inefficiency at which our public sectors education units (PSEUs) operate ?

The most important component of an educational unit is its manpower, its people. This is generally true for most industries but more so in EUs that deal with the generation and transmission of knowledge. In fact a university is not a collection of buildings and equipment but in reality a collection of people and our first focus should be on people -- how to get the attract and retain a lot of good people here.

This is not too difficult if we can delink ourselves from long held and obsolete beliefs and look at the best practices of successful corporates. What we need is a modern Compensation and Benefits policy that ties pay to performance. Current salary levels in the education sector are low but what is more important is that there is no linkage to either performance or market realities. There is neither a carrot nor a stick so the good teacher and the bad teacher are paid the same -- as cast in stone by government agencies like the 6th Pay Commission. Also teachers in subjects that are in great demand -- like engineering -- are paid the same as that in subjects where demand is less and where availability is more. Finally teachers in remote locations should naturally be paid more, openly and not through some accounting subterfuge, because no one wants to go and teach in such areas. Net-net there cannot be one uniform, monolithic, one-size-fits-all Comp-n-Ben policy that covers all PSEUs. In industry, the days of centralised socialism are over. Salaries are now driven by the market forces of supply and demand and the education sector cannot be allowed to remain insulated from the winds of change.

If it is not the central government -- the UGC or the 6th Pay Commission -- then who determines salary ? The obvious answer is to look at "standard" PSUs -- the SAILs and BHELs of India. These are government organisations that have, because of market pressure, migrated to some kind of a performance-based pay at least for the officers ( or "executives"). Moreover each such PSU has its own pay structure determined by the market in which it operates. There is no centralised mechanism that governs PSU salary structure. So should be the case with PSEUs -- each institute or college should move towards its own performance based compensation structure at least for the faculty, if not for the staff.  Depending on its location, the subjects it teaches and the quantum of funds that it has -- grants plus income -- each PSEU should work out its own Compensation and Benefits policy that will allow it to attract and retain the best faculty that it can afford.

Faculty and staff who have never faced a performance appraisal will generally be uncomfortable with if not actually hostile to such activities. They will raise the bogey of favouritism. They will ask who will decide on the yardsticks of performance measurement ? That is best left to the individual PSEUs who can figure out what constitutes good performance. It could be teaching performance in the classroom or it could be research performance in terms of papers published or it could administrative performance in terms of the various non-teaching jobs that a faculty has to do --admissions, placement, fund raising and what not. No two PSEUs are same and so no common policy is possible or should be imposed. Each company -- in the private sector and increasingly in the public sector -- has its own appraisal mechanism, none of which are perfect but all of them are -- by and large -- useful in rewarding performance. There is no reason why PSEUs cannot do the same.

Which brings us to the next topic, affordability or the larger question of finances.

While it is nice if PSEUs can generate their own revenue -- through fees, consultancy or alumni endowments -- it is a fact that education is something that the tax-payers money should be spent on and government grants will, and should, continue to play a signficant role in PSEUs. Point is are these grants being used efficiently ? And the answer is NO.

If one looks closely at the money that the government spends on education --  especially in places like the IITs -- one would soon realise that the quantity is not very small but the tragedy is that most of the money is spent wrongly. It is not that money is being stolen -- there are enough checks and balances for that -- but accountability remains a big challenge. Since there are no statutory audits as is the case of companies and there are no modern accounting systems no one quite knows where the money is going. Elementary accounting principles like cost-code, charge-accounts,  planned and actual expenditure are unheard of. All the money is dumped into one gigantic pool and the granularity of accountability is only at the level of the Head of the Institute. In this murky atmosphere most of the money is spent on non essential items whereas critical areas like performance benefits for good teachers or equipment for labs or books are starved of funds. Net-net, it is not the quantum of money that is the issue but proper accountability of the existing money that is essential.

Our initial premise was that the PSEUs are inefficient -- the output is meagre when compared to the input. A rugged, robust, industrial grade financial accounting system would be a good way to monitor and control the input side of the equation. The Institute of Chartered Accountants and the Registrar of Companies have joined hands to create a set of generally accepted accounting principles against which a company is measured during the statutory audit. Perhaps the ICAI and the UGC ( or MHRD or the AICTE or whoever wins the turf battle to become the Single Regulatory Authority for Higher Education ) should create a similar mechanism so that the tax-payers of India, whose money is being used to fund PSEUs, should have a clear visibility on the usage of  funds in the PSEUs.

Once we have a good financial management system that clearly shows the use ( or misuse, abuse ) of funds in a PSEU appropriate decisions can be made or appropriate individuals can be held accountable. Once accountability is established at a granular level, there will be a pressure to be more economical with expenditure and many of the best practices of cost management that are in use in the corporate sector will eventually enter the education sector. Overall the system will become more efficient in financial terms.

Our goal is to improve the efficiency of our PSEUs and now we have two handles : (a) a financial management system to make sure that money is spent wisely and for the right reasons and (b) a compensation and benefits policy for the faculty ( and if possible for the staff ) that drives rewards towards people who are really needed -- the high performers.

Once these are in place, we can move to the next level , where funds to individual PSEUs will be granted on the basis of the performance of the EU as a whole -- that would be the subject of another blog post.
Posted by Prithwis at 4:43 pm