A decade and a half ago, in the early days of outsourcing of software development, when clients in the US were sceptical about the feasibility of teams working across vast distances we had coined a term : Geography is History. What we meant to say was with the rapid advances in communication and collaboration technology, the geographic location of members of dispersed teams did not matter any more and dispersed organisations could be as productive and efficient as localised operations. In fact in an earlier blog post, I have hypothesised the possibility of actually Deconstructing the Corporation.

While teleconferences, email, remote login, shared screens were all technologies that were used in these situations, the most coveted technology was video-conferencing. This was because the richness and intensity of the interaction was the highest with VC and yet because of bandwidth and other issues it was the most difficult exercise to actually execute upon. More often than not, it was the technology freaks who would use it the most while the bulk of the actual managerial work was usually done on tele-conference calls and stuff like Webex that allowed clear voice on telephone and live screens on the laptop. With the advent of Skype and Google Talk we had desktop video-conferencing but that was more of a one-on-one affair. So things stood, in my mind, until today ! when I walked into Tata Steel's Telepresence Room !

And this was mindblowing ! 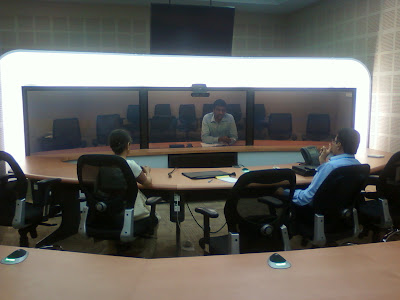 Imagine an oval table split into two halves. One side is me and some of my colleagues and on the "other side" are people with whom we wish to have a chat -- and the only trouble is there is no one on the other side except three huge screens with the live images of people who are thousands ( or in my case, hundreds, thought that hardly matters) of miles away ! I have seen this in TV ads but the real thing was amazing -- because the people on the other side are exactly at your level and the size of the image is exactly that of a live human being, the illusion of a "real physical" meeting is phenomenal. And adding to the effect is the fact that the two rooms at two locations are identical to the last detail. So just as a huge mirror on the wall makes the room larger, the presence of the image of the other room -- along with people at the remote location -- makes it feel as if we are in one huge room with people sitting at the other edge of a rather large oval table. In fact the presence of tea cups on the remote table is so lifelike that one may be fooled into trying to reach out and get a cup for yourself. 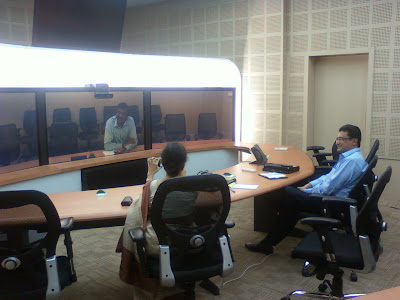 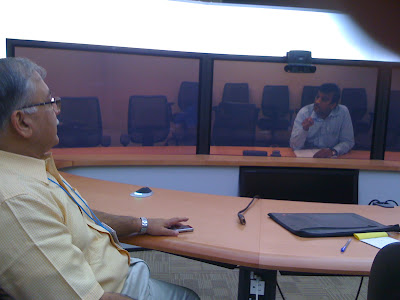 The quality of sound was such that even the tiniest whisper would carry over to the remote location, unless one would choose to mute the microphones and the 25 MBPS pipes ( of which I was told that only 16 MBPS is actually used) makes the video as smooth and as natural as physical vision. In fact, the illusion is so complete that I was left wondering whether there was anything more that one could do to enhance the reality of the digital image ... and then it struck me ! Why not replace the normal camera's at each end with 3D cameras and the display devices with the new 3D TV sets that are just becoming available in the market ? The challenge is of course the need for clunky 3D spectacles but that too might become a thing of the past [ see my earlier post on new age spectacles ]

In fact with the rapid emergence of these new technologies, a day may come when on meeting someone somewhere, we may be forced to ask "Are You Real"

Actually, I was wondering about this for quite a while - the idea cropped up when I a was thinking of way to conduct Kanban meetings around the globe at the same time and removing ridiculous planning tools which no one looks at.