When Kalyani Chaudhuri, the retired IAS officer from West Bengal started to write a book on the death of bureaucracy and governance, she thought that the Left Front Government would rule the state till the end of eternity. Her book -- When the Pendulum Stops -- recounts the depths of depravity to which a state can sink when it is ruled by one political party for a very long time. We are aware of one party dictatorships in the erstwhile USSR and in China but how is it that West Bengal with its periodic elections have had to share this fate ? Let us go back in time and look through a bit of history. 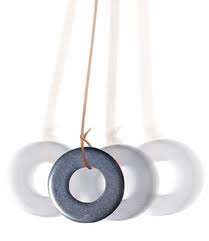 The communist parties came into power on the basis of the general mis-governance perpetuated by the ruling Congress party in the 1970s and the first thing that they did to ensure their permanence in power was "Land Reforms". We have been told ad nauseum that because of these reforms the economic structure of rural Bengal was revitalised to such an extent that the generations of voters have rewarded their benefactors. Unfortunately this is a lie but it is a Goebellian lie that has been repeated so often, that it is now accepted as truth. No one has really questioned whether the emperor had any clothes or not -- everyone was just too lazy to consider the following :

So the much vaunted land reforms policy was an eyewash and a measure of cheap popularity. Despite vigorous encomiums to the contrary, these so called land reforms did nothing to improve the fundamental economic structure of rural Bengal. Reams and reams of pseudo-economic papers have been written, mostly by left leaning academics who have directly benefitted by the patronage of the Party, but no one has ever had the guts to ask why the peasant in Gujarat or Himachal is significantly better off than their counterparts in Bengal. We are happy to point to our miserable neighbours to show great we are. Moreover, these forced breakup and distribution of land has led to such micro fragmentation of holdings that no modern agricultural technology can be brought to bear on these plots any more. Thus the ruination of agriculture is complete !
But if land reforms did not have any impact, how is it that the Party has thrived and prospered for so long ? How come that the pendulum of democracy that should oscillate naturally between the party in power and that in the opposition get stuck ? My explanation, written on the eve of the 2006 state election, is that the Party, much like is mentors in the the USSR and China, had taken on a vice like grip on all aspect of life and society in Bengal and even though most people could see through the hoax, there was  no way that they could escape from this grip. Just as the introduction of gunpowder had introduced an overwhelming asymmetry in medieval warfare, so did the concept of "scientific rigging" introduce a whole new dimension to electoral battles. Other political parties just could not cope up with this new phenomenon and could only howl in despair.
But as we say in Bengali ধর্মের কল বাতাসে নড়ে  , the wheels of justice are turned by the wind ! You cannot fool all the people all the time. The disenchantment against the ruinous deterioration of public services -- the collapse of schools, colleges, hospitals and other instances of social infrastructure -- could not but add fuel to resentment that was simmering in people's minds. To this was added the new found enthusiasm for modern industry ! After having sacrificed Bengals industrial backbone at the alter of militant trade unionism, the party suddenly realised that there was nothing more to extract from the rural population but the land that they were occupying. So let us take it away from them at a pittance and sell it to crony capitalists for another onetime windfall. This was what happened in Rajarhat but that success was the last one. The next two land acquisition attempts at Singur and Nandigram met with massive peoples resistance. The drives faltered, came to a shuddering halt and then was turned into an ignominious retreat. For the first time, people realized that the party was not infallible !
Mamata Banerjee, the David who had stood up to CPM's Goliath for the past decade and half -- when the rest of the official opposition was busy licking at the scraps that the party had thrown under the table -- was the one person who had not only felt the pulse but had the energy, the determination, the stamina and the conviction to pursue the goal of dislodging the party from its entrenched position. But despite her best efforts she would not have managed to do anything without the hidden hand of destiny and -- surprise of surprises, Mr Prakash Karat, the head honcho of CPM LLC in India ! This arrogant academic who believes that JNU student politics is the same as national politics took the incredible decision to burn the boat on which the communists were floating. Check out my post on Karat and the Deliverance of Bengal !
So whether it is the dawn of wisdom in Bengal or the tenacity of Mamata Banerjee or the stupidity of Karat or the painstaking work of the Election Commission, the voice of the people of Bengal has finally been heard and the voice bids goodbye to the communists. Sceptics would point out that the alternative is no better in terms of honesty and competence but as Kalyani Chaudhuri points out in her book, the existence of an alternative is by itself the best thing that could have happened.
Let the pendulum swing and let the bells toll -- to ring out the old and ring in the new, to ring out the false and ring in the true -- for years to come.
Posted by Calcutta at 6:43 am