The Temples of Pathra

Just 20 kms from IIT Kharagpur, on the banks of the Kangshabati River ( aka Kansai, Cossye ) are the 300 year old ruins of some beautiful terracotta temples that were built by Bidyananda Ghoshal, the revenue collector of Ratnachowk Pargana appointed by Alivardi Khan, one of the notorious Nawabs of Bengal [ The Telegraph ] People have known about the ruins for quite some time and they do get a small but steady stream of visitors but it is the untiring work of Mohammad Yeasin Pathan, a resident of a nearby village, that has really helped preserve what was left of a unique slice of the heritage of South Bengal. 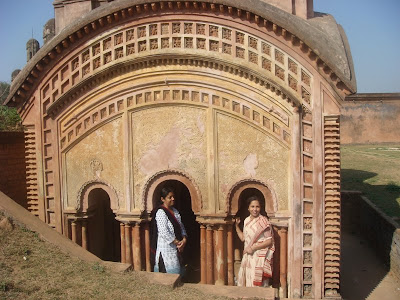 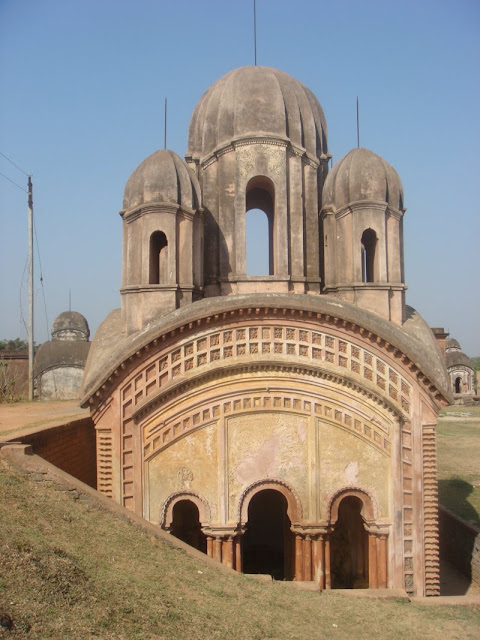 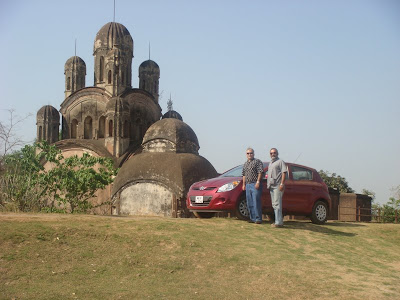 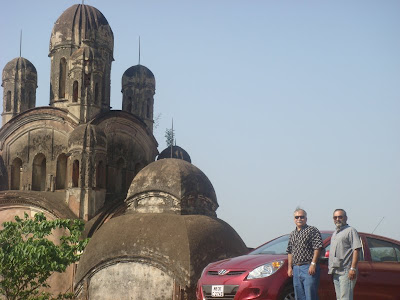 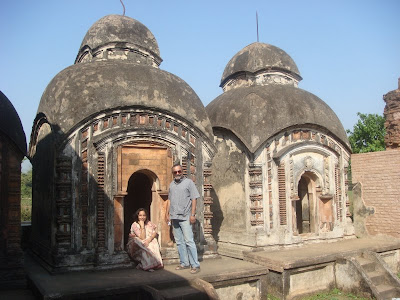 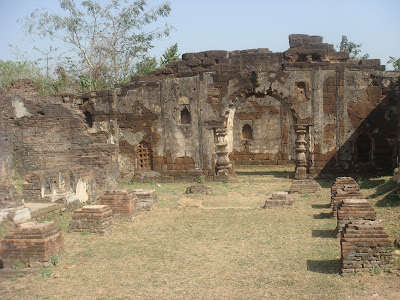 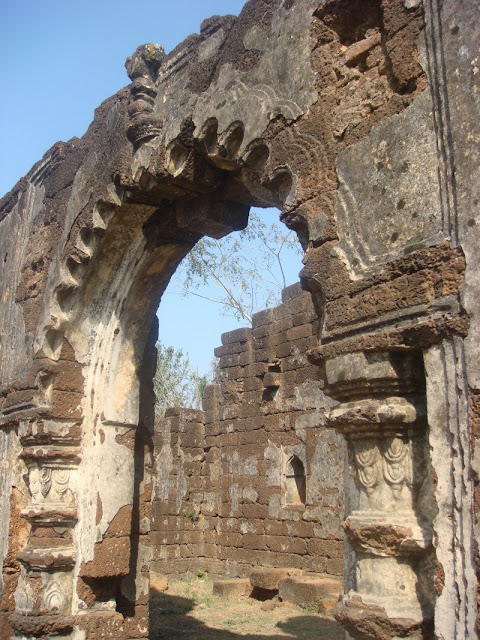 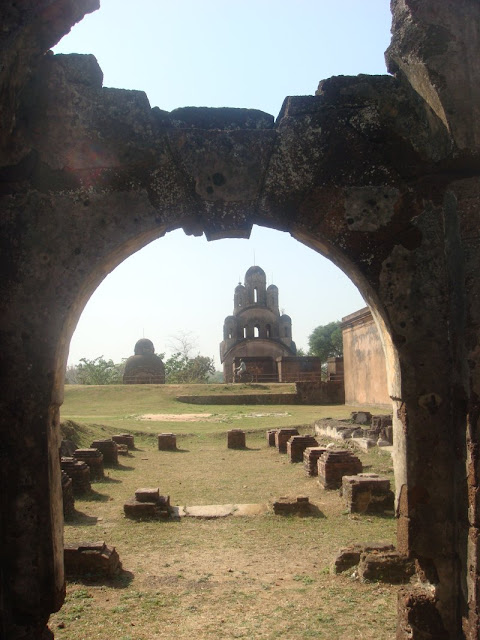 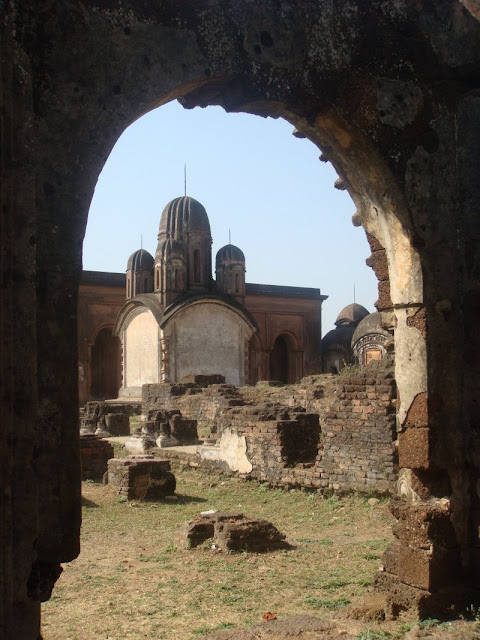 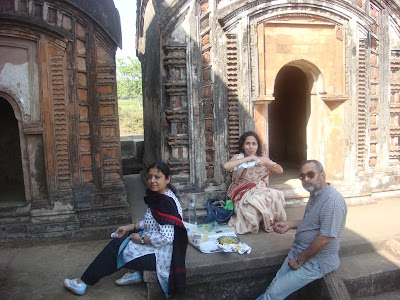 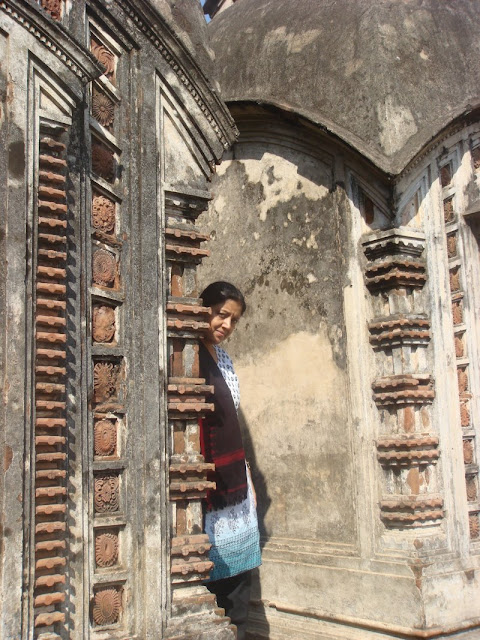 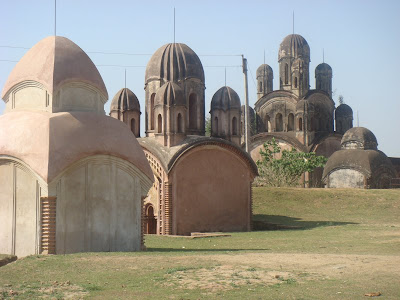 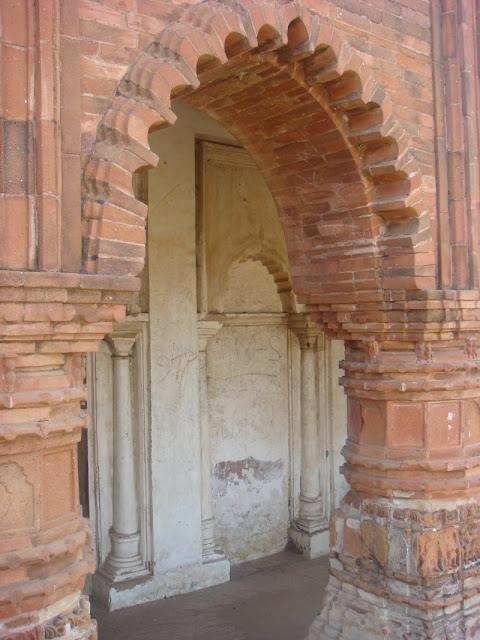 The following pictures are of a second series of ruins that are located a little away from the main road. These temples are better preserved and have intact Shivalinga idols that are still worshipped by the locals. 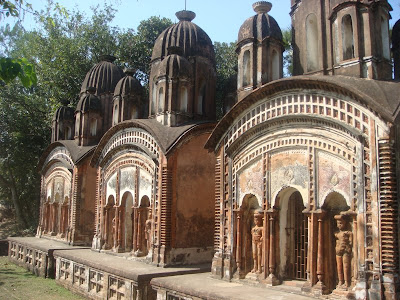 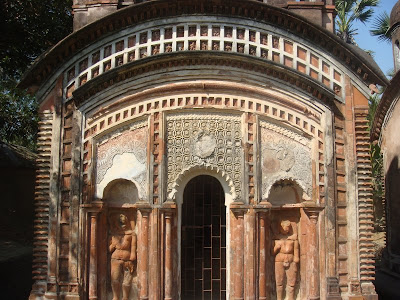 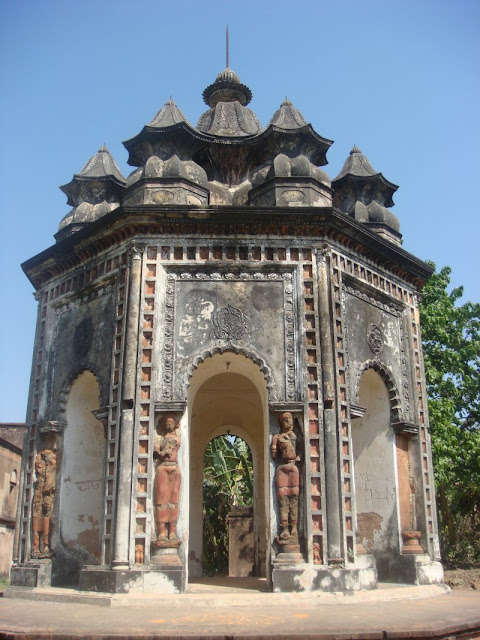 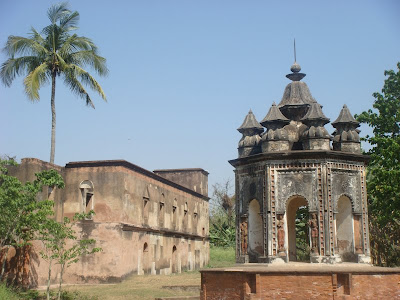 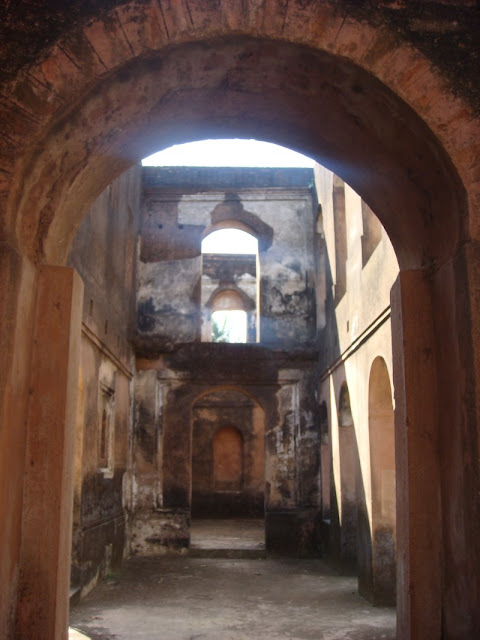 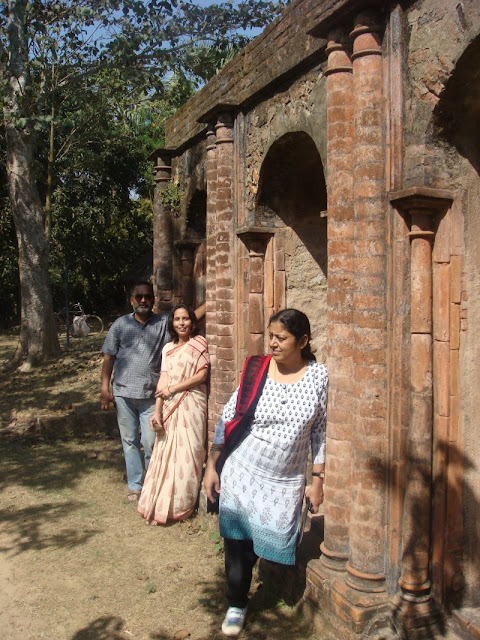 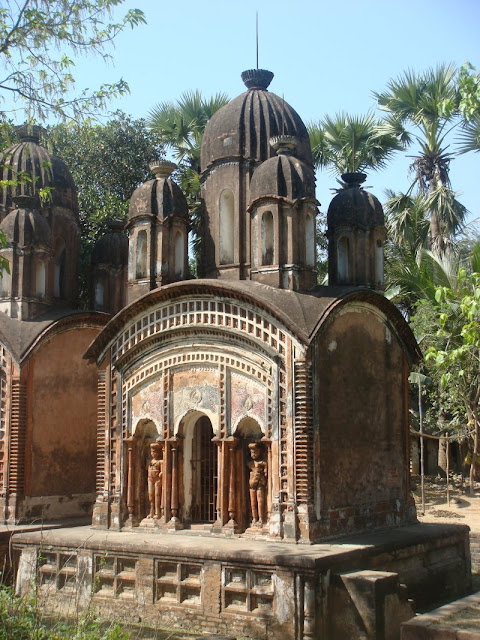 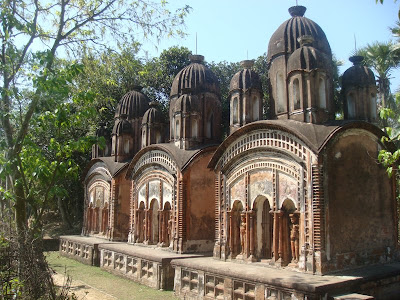 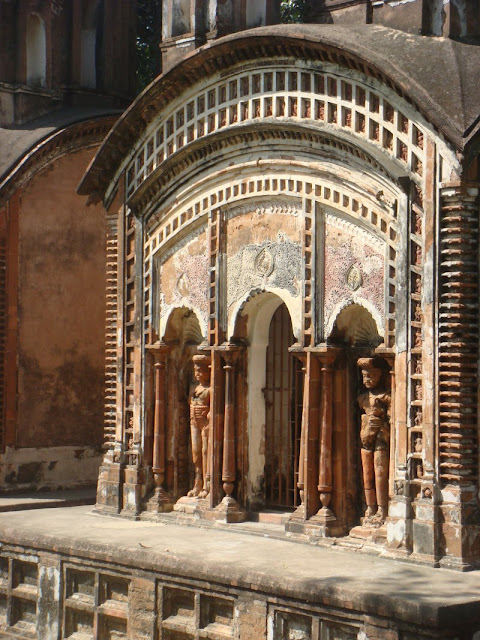 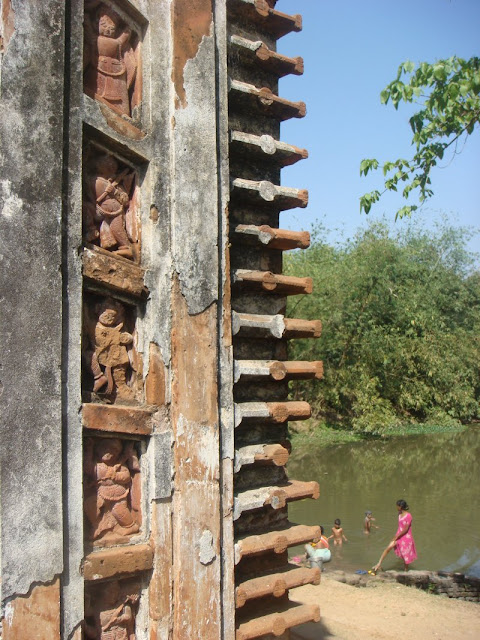 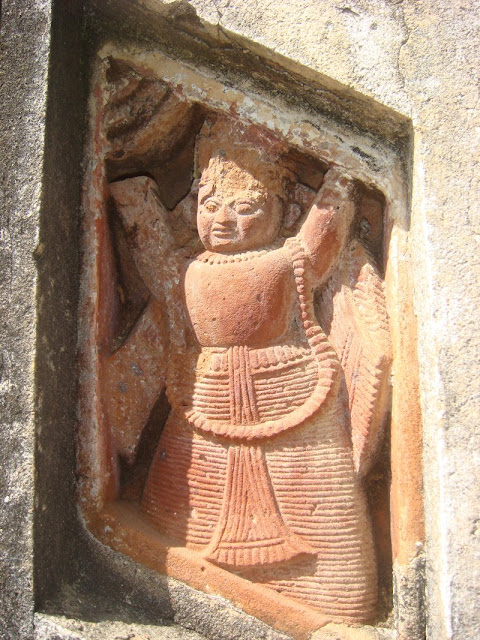 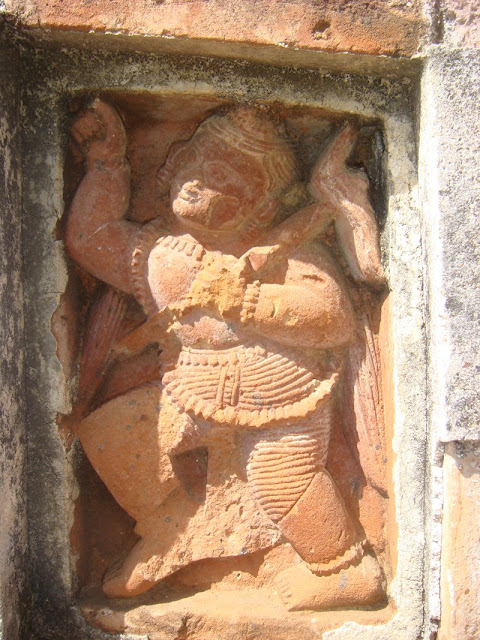 To reach Pathra, one goes North from the National Highway 6 [ Bombay Road ] towards Midnapore. At the Kangsabati bridge there is a sharp right turn off -- almost a U turn -- that makes a loop and enters Midnapore    through a road that runs under the bridge. At the end of this loop, there is a fork in the road one of which goes towards Midnapore and the other runs roughly East and parallel to the river and goes towards Pathra. Follow this road to the village of Hatiolka -- where you fill find a giant banyan tree on the left -- and then take a left. Keep following this road until you reach the temples which are well marked with ASI signboards.
There are two sets of temples, one on the road and near the river and second set of temples located about 200 m away and not at all visible from the road. These temples are far better preserved and well worth the little walk that will carry you there.
Posted by Calcutta at 7:01 am

mesmerizing. hopefully get to visit someday ! interesting piece of history .....

Instigates in me a joyous trip to the same....

Hmm! Should try it out sometime with friends.

I'm sure it'll come to my head next time we have a holiday too short to go home and too long to just waste away!

Thanks for the directions with map!

Mandir may Pathra is a Great Turist Place of Midnapur Distric.Ajharul

This wonderful site is still not very focussed. Thanks to Mr.Pathan who has given yeomen service. let Midnapur District Administration and local bodies improve this site and make the road motor-able. Much pleased to visit the site today and overwhelmed to see the Terracotta art on the faced of the Temples.