Crisis as a Catalyst / Women at Work

We are surely aware of SaaS or Software as a Service but let us explore the intriguing concept of the Crisis as a Catalyst for Change. 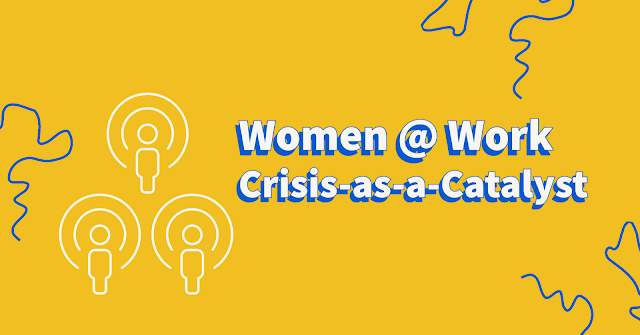 Those of us who are old enough to have been professionally active during the Y2K era, would recollect that industrialised societies, especially the US, were in a tizzy over how computer systems, both private and public, would collapse on 31 Dec 1999. This was because of the way dates had been defined with two digit years since the dawn of the computer age in the early 1960s and no one had thought that 99 would be followed by 00. Hence massive IT projects were commissioned to make systems Y2K proof by rewriting the code to accommodate four digit years so that 1999 would be followed by 2000.

But the size of the task -- spanning so many organisations and their plethora of systems -- was so huge that there were simply not enough programmers to make even this simple change. At this point of time, software companies in India were trying to do business by sending inexpensive Indian programmers to the US for doing this job. But the process of obtaining  employment visas and the logistics of airfare, hotel stay for programmers and their families was very expensive and cumbersome.

Some progressive software companies in India suggested that the work be done remotely using the newly established internet and the rising spread of telecom facilities but this was initially laughed at and scorned. How on earth could programmers work from a distance without sitting in close proximity to the end users. Any such proposal was initially rejected outright, but then as deadlines came closer, backlog increased the logistics of moving humans across international borders became insurmountable challenges, most customer companies eventually relented.

The Y2K crisis spawned the concept of off-shore delivery centres where people working from India could deliver services in the US at the same level of performance as people sitting in the US. Thus was born a whole new business model that allowed a vast number of people to be engaged in mission critical work without having to step on to an aircraft and cross immigration barriers.

The internet and web based applications like eCommerce,  online banking, social media and video phone-calls have taken over the world. But there is one corner that is still dark and unpleasant. While we had the technology to work from home, no company was yet ready to allow its employees to do so. Some were openly suspicious about people not being punctual and sincere at home and the other more liberal ones felt that without face to face meeting it is not possible to run a large company. Most employees were resigned to this fact except that women employees are far more affected than men.

This is because for a variety of reasons, women in India are not as mobile as their male counterparts. Whether this is correct or not is a matter of another debate, the fact remains that this is often held against women when it comes to mission critical roles. We understand the need to care for children and we also say that these loads need to be shared by men but the fact on the ground is that women have to, or are seen to play a far bigger role "at-home" than men who are "out-at-work".

But just as the pressure of the Y2K crisis broke down the barriers to off-shore delivery so did the Pandemic2020 break down the barriers between "home" and "work" in the spirit of Tagore's Gharey-Bahirey. Suddenly everyone, right from the CEO downwards, was working-from-home and that too not just for a day but for nearly two years and still counting. And did the corporate sector suffer because of this? Certainly not if you consider the booming stock market.

This new model of work-from-home has not only helped corporates survive and prosper in these difficult times but has had an unintended and huge impact on women executives. Now that no one expects them to step out of home, many more of them can seek significant engagements in the corporate world, and this is more important, corporates have now accepted that work-from-home is as good as, if not better, than people crowding at the office!

Just as Y2K showed how to access to a vast pool of Indian talent without the overhead cost of visa, airfare and travel, so has the Pandemic2020 given corporates access to a vast pool of talent without the overheads of commuting and the administrative cost of maintaining a large office. So even if complete work-from-home may not become the norm, a hybrid model would surely become widespread and acceptable in the corporate community. This could take many different forms but essentially employees would have the option of working mainly from home and be at office once or twice a week or even a month. Video conferencing and collaborative work tools, that have been around for many year but have become acceptable in the last two years will become the backbone of the organisation just as email and MS-Office has been over the past so many years.

The biggest beneficiaries of this new, work-from-home model would be women who would now be able to balance their corporate and domestic duties with much more ease and elegance and this will lead to significant rise in the percentage of women employees in the workforce.

We can only hope that both corporates and talented women will see this trend and jump on to this bandwagon as quickly as possible.