The Snake in the Shadows 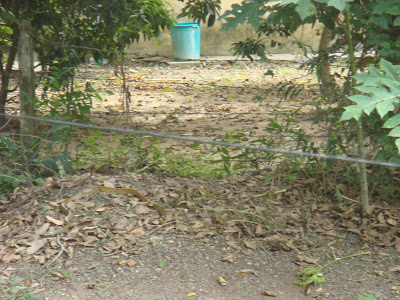 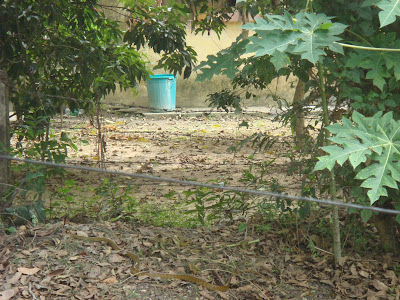 This snake decided to pay us a visit, much to the annoyance if not terror of the inhabitants.
If anyone can identify the species please add a comment.
Posted by Calcutta at 1:19 pm 5 comments:

Ten years ago I had the opportunity to participate in a discussion on the impact of technology on creativity and innovation at one of the Seagull book stores in Bhawanipur. This had been organised by one of the Bengali "little magazines" that Calcutta is famous for and on arriving at the venue my initial thought was that my invitation had been a mistake -- because almost everybody else was either a poet or a writer or an artist (though none were well known, then or even now ) and I was the sole C-programmer in a T-shirt in a sea of dhoti, pajama, kurta and tea cups.

To cut a long story short, the discussion focused on how cheap technology -- mostly TV and cinema -- was destroying the great cultural canvas of books, painting, theatre and jatra and reducing us to mechanical robots and why -- horror of horrors -- pristine Shantiniketan and not the crass commercialism of Bombay or Bangalore should be the benchmark against which Calcutta should measure itself.

I tolerated all this with a modicum of grace till someone mentioned that the latest devil was computers and how that evil abomination would drive one more nail into Calcutta's cultural coffin. As an example, one wise man pointed out that a computer where you mindlessly entered data and pressed a button to get a result was a prime example of this absolute lack of creativity.At this point I could not but rise to the defence of my profession and pointed out that perhaps my co-panellists were not aware of the ingenuity and skill that goes into building the program that allows such effortless  use. Realising that it was impossible for me to convince them of the beauty of systems architecture or the algorithms that power them, I tried to talk about the emergence of websites -- my Yantrajaal was just about a year old by then -- but soon realised that I was in the company of those who know not and know not that they know not. For them, the only thing nice about my website was the clever name Yantrajaal -- a new sanskritised compound word that referred to a network of devices. The text and images on the site were too trivial for any genuine artist to even look at. Perhaps I could have tried harder but then it was getting late and I with my patience being rapidly replaced with irritation I decided against prolonging the agony. I picked up the box of food that was my due and left the venue at the earliest available opportunity.

That was then. Why do I rake up this issue today ? Because I came across this presentation from Google that shows some of the highly creative things that innovative people are doing with technology. You may see the presentation here itself in this post or go the site itself -- and believe me it will open up your mind on what all can be done.


This presentation showcases 100+ projects where people have built or "mashed-up" applications in extremely innovative ways to create what I believe are examples of digital art. Not every project will appeal to all but given the diversity of ideas presented, I am sure everyone will find at least one that will thrill him or her.

As a self-proclaimed word-artist, I was really impressed with Text 2.0 and in my wanderlust, this brilliant virtual journey on the Trans Siberian railway took my breath away. Please go through this presentation and see what fires your imagination -- or better still come out with one such project of your own.
Posted by Calcutta at 10:24 am 1 comment: