Authority, Responsibility and Trust : The ART of Red Tape

We come across, and frequently use, the phrase red tape and we know that it refers to the delay that is endemic to the bureaucratic process - but have you ever wondered why is that bureaucrats are so slow in doing things ?

Anybody who has visited a government office in India would of course attribute this delay to competence or corruption. More often than not, a little bit of speed money -- the chaipani -- has a magical effect and most red tape disappears. On the other hand, we do know that the best and brightest in the land are hesitant to join the government and so there does exist a certain lack of competence in administrative matters.

But let us be charitable for a while and assume that our bureaucrats are indeed competent and NOT corrupt : in that case should red tape not disappear from our lexicon ? But it does not and will not .. and here is why !

You ask a sarkari babu to buy a computer for his office and he ( or she ) will get tied up in knots ! Committees will be formed, specifications will be drawn up, tenders will be issued, evaluation committees will be set up, contracts will be "negotiated" ( OK, in this case without kickbacks), purchase orders will be issued, AMC contracts will be discussed and then -- and only then -- a single machine will arrive in the office -- the process will take not less than a month but more often than not three months.

But when the same sarkari babu sends his son to college and the son wants a computer, how long do you think the process will take ? Perhaps a day to check with a more knowledgeable colleague and then another day to make the purchase -- at most three days !

Why is there so much difference in these two cases ? In the second case both the AUTHORITY and the RESPONSIBILITY of buying the computer lies with the same person but in the first case, it lies with two different persons ( or different organisations)

This separation of responsibility and authority is the root cause of all bureaucratic delays in the government. The police are responsible for maintaining law and order but the authority to sanction the money lies with someone else. The PWD is responsible for repairing roads but authority lies somewhere else. And it is not just financial authority ( though that is the most important one). The authority to issue a formal circular ( to clarify some obscure point of view ) does not generally lie with the person who is supposed to act upon that obscure point of view.

Separation of responsibility and authority is not a bane for only the sarkari bureaucrat. Employees of private companies have to go through the same process but the delay and level of pain is less because in many cases the source of authority and the agent of responsibility is organisationally closer and in many cases the two entities merge into one office : a manager who is responsible for sales is also empowered with the authority to spend money.

So the separation between authority and responsibility is less and in many cases, it does not exist. Why is it so in private companies but not so in the bureaucratic bowels of the sarkar bahadur ? The answer lies in the third element of the ART of Red Tape : TRUST.

Owners of private companies -- as reflected in Boards -- have a level of TRUST in the their managers but the owners of the country -- as reflected in legislature -- do not trust the administrators. It is almost as if it is a self evident truth -- an axiom -- that a government servant cannot be trusted to do anything. You need to have a complex system of checks and balances -- the Vigilance Department, the CAG, the CBI -- to keep an eye on each other.

Authority, Responsibility and Trust -- unless we as a society can come to grips with these three factors and work out a way to harmonise their relationship, bureaucratic delays will continue and we will be left admiring the ART of Red Tape.
Posted by Calcutta at 6:03 pm 1 comment: 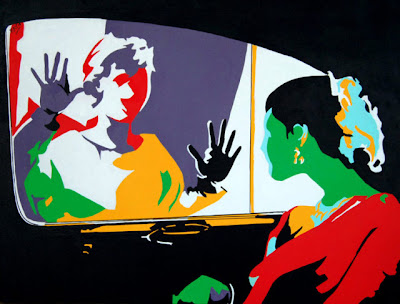 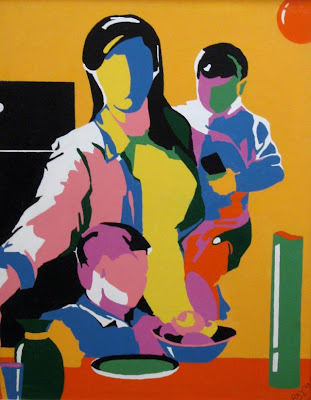 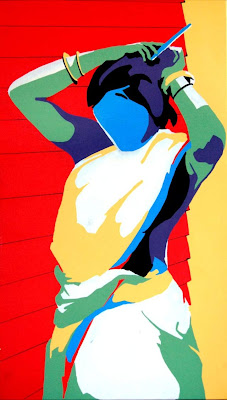 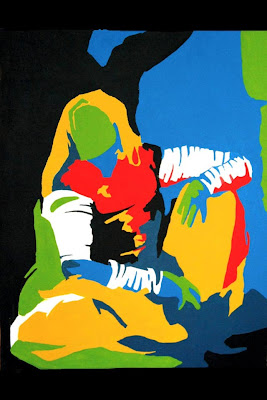 While I do appreciate abstract art -- particularly shapes and colours that please the eye -- I do not always agree with the statement that "if you are looking for meaning in art, then you are barking up the wrong tree". Shapes, patterns and colours are nice but they are even nicer if they can communicate something that you recognise and can identify with.

I came across these paintings by Devajyoti Ray at the website of Galerie ArtEterne and was very impressed by both the form and the content.
Posted by Calcutta at 9:47 am 2 comments:

Email ThisBlogThis!Share to TwitterShare to FacebookShare to Pinterest
Labels: art

Hope, Hype and Honesty : Technology at the Edge

source : Gartner Report
Every new technology ( or idea for that matter ) that appears in the human psyche goes through the phases shown above [ see chart ] if they survive adolescence and enter maturity. Virtual Worlds, Web 2.0 and Cloud Computing are three ideas that keep churning through my thoughts and I was pleasantly surprised to find the three of them being addressed in the Gartner report on technology hypes.

Being an early enthusiast of and evangelist for Second Life -- the 3D Virtual World where I had first set up my first Kali Temple and virtual Praxis B-school -- I had been resigned to the fact that low penetration of personal broadband lines will hamper the growth of this wonderful technology. But I was pleasantly surprised to discover that Second Life has posted a 94% QoQ growth and now has nearly US$ 50m of user to user transactions every month. Also the availability of Wireless Broadband from the CDMA players will accelerate acceptance and finally pull it out of the "Trough of Disillusionment" and take towards the "Plateau of Productivity"

Web 2.0 is moving closer into the "Slope of Enlightenment" and we can see it right here at Praxis and our very own Kollaborative Klassroom. Not only have we adopted this Orkut lookalike as our base platform, it is so widely popular with both students and faculty that we very often wonder how other schools and colleges can do without this platform.

However, Cloud Computing is in danger of having a dramatic fall from the "Peak of Inflated Expectations". While we at Praxis continue to use Cloud Computing to the hilt -- both for our Kollaborative Klassroom, as well as a part of our academic curricullum -- there has been, of late, some reality checks that have been performed on the claims that are being made by the various vendors like Google, MS and Amazon. These test show some weaknesses but this only to be expected in an area as new and as challenging as this but I am quite sure that once people get to know about tools like Zoho Creator, the adoption process will pick up and enter the mainstream.

But while it is good to know that technologies that were once at the bleeding edge are now moving into the mainstream ... what is that shall keep us awake at night ?

Thought controlled MMORPG ? Think about it and no puns intended !
Posted by Calcutta at 10:54 am No comments: