The Second Book on the Third Wave

Steve Case is such a big fan of Alvin Toffler’s 1980 classic, The Third Wave, that when he pens his own memoirs he gives it the same title. In his seminal work, Toffler had identified three distinct waves in the evolution of human society as the world moved from agriculture, through industry to become a post-industrial information driven society. Steve divides Toffler’s third wave -- the information phase -- into three sub-waves and then examines the third of this third in greater detail.

In addition to being his memoirs, that chronicle the rise and fall of America Online, the company that really got Americans hooked to the internet, there are two other distinct themes that Steve has woven into this easy to read book. First he wants to be mentor and cheerleader for the entrepreneur who has an idea to change the world and does not know how to go about it. The second, and this is pet theme, is the distinction between the first, second and third waves, or sub-waves, of the internet driven economy that dominates the world today. 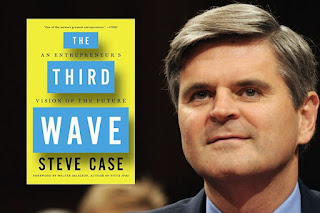 For Steve, the first wave, in which he and his company AOL played a very significant role, was all about the setting up of the infrastructure of the internet and world wide web. This wave collapsed in the dot com bust and was followed by the second wave of applications -- Google for search, Facebook  for social media, WhatsApp for communications, Amazon for commerce. The key difference between the first and the second wave was that the second was driven by individuals, or small groups, using cutting edge technology while the first wave was not so much about innovative technology as about clever collaborations and partnerships. Steve admits it as such when he says that “AOL was not alone in believing in the idea of the Internet but we outhustled and outexecuted our competitors. The big companies like IBM and GE, should have prevailed, but they didn’t. Their lack of agility and entrepreneurial passion and culture hobbled them.”

The third wave will finally see the internet delivering on its promise of universal connectivity that it’s evangelists have been talking about since it’s early days. IoT -- the Internet of Things -- will connect every device from the car, to the toaster, the smartphone to the refrigerator, the powerplant to the electric switch through the internet and deliver innovative, useful services seamlessly. Steve believes that this connectivity will be so ubiquitous that the phrase internet enabled device will be as irrelevant as, say, an electricity enabled washing machine. Being connected to the internet will be the default and not a novelty or a USP. This will also ensure that third wave companies, and applications, will not create new or unusual business opportunities but will streamline and make more efficient, existing mainstream businesses like healthcare, education and agriculture that form the backbone of the global economy today.

Steve believes that the key and crucial differentiator for the third wave companies will be, like the first wave once again, partnerships. Unlike Elon Musk or Jeff Bezos, Steve is no champion for new or groundbreaking technology. Instead he believes that the success of the third wave entrepreneur will lie in stitching together a network of alliances and partnerships across three kinds of entities, namely, technology creators, mainstream businesses and government agencies. Knowwho will take precedence over knowhow. Unlike most technophiles, Steve believes that government can and must be trusted and, however difficult it may be, the entrepreneur must walk that extra mile to take government along if he wants to succeed. Entrepreneurs in India would, I am sure, wholeheartedly go along with this sentiment since they know very well that in India managing the government is more important than technology or management systems.

As an extension of his recurring belief in the value of partnerships --  “If you want to go quickly, go alone, if you want to go far, go together” -- Steve has a team of professionals from West Wing Writers to sieve through his speeches, distill out the wisdom and package it into this nice book. But as in anything created by a committee, the result, while being faultless to a point, lacks the brilliance of original ideas or the elegance of literary craftsmanship! Entrepreneurs however will see in Steve an image of their days of struggle, learn about the importance of networking and partnering with government and be motivated to jump into the third wave of the digital society that is already cresting around us today.

Originally published in the August 2016 issue of Swarajya, the magazine that reads India right!
Posted by Prithwis at 6:58 am No comments: