Kharagpur, Khargeshwar and the Mahabharata Connection

Thanks to 50+ batches of B.Tech engineers who have passed out through its portals -- and have subsequently percolated into every kind of business on the planet -- IIT Kharagpur is a fairly well known name in the literate parts of the world. Riding on the back of this illustrious tenant, the sleepy railway junction of Kharagpur has emerged from the obscurity of being another town in Midnapore and has also achieved the status of place that people actually go to, not just merely come from ! Those of us who have been to Kharagpur or  arestill there are also aware that the institute premises  include the famous Hijli Jail and is adjacent to the Salua Airforce base which was the home of the Very Heavy Bomber Squadron of the RAF during the Second World War.

But what is origin of the name Kharagpur ? A quick search through Google reveals that there are quite a few stories about the place but the consensus is that it is named after the Khargeshwar Shiva temple that is located in the southern suburb of Inda. Today, we visited the place and finally located the temple. 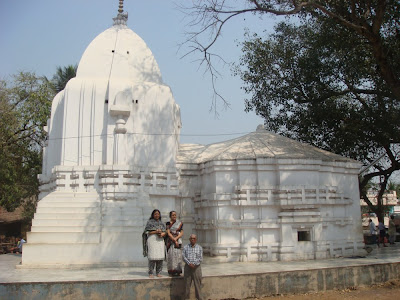 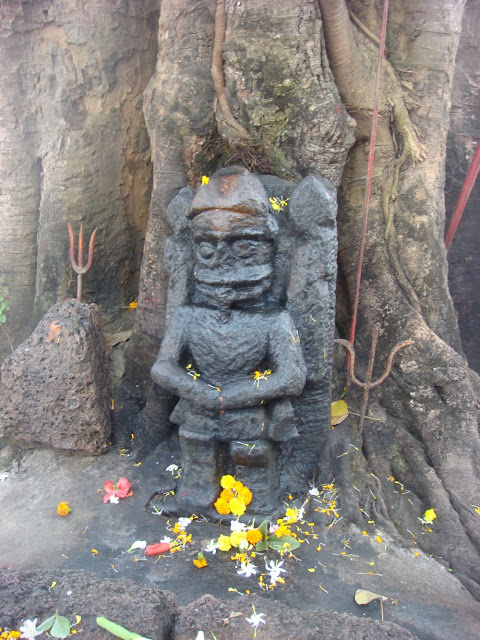 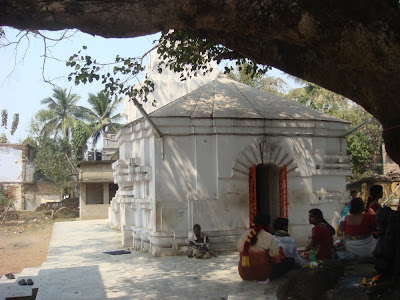 The current temple is not too old but then we heard a story that really made our journey very exciting indeed.
The Mahabharata Connection
While we were there we heard of another temple that apparently has a far longer history -- the Hirimbeshwari Temple dating back to the Mahabharata Era.
When the Pandavas were forced by circumstances to travel incognito they had passed through the "non-Aryan", tribal areas of what is now known as the Chotanagapura or Santhal Pargana. Apparently Inda (located just south of Kharagpur ) is the place where they had stopped for a while and while here Bhima had first battled and then married a tribal princess ( a "rakshashi" or ogress in the language of that era ) called Hirimba. The Hirimbeshwari Temple was were this princess used to come for her prayers and this is where we went. 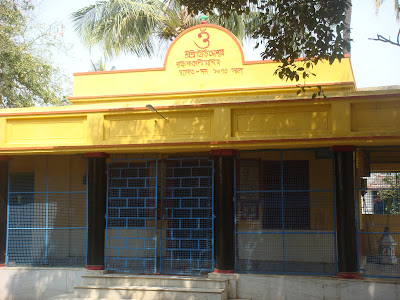 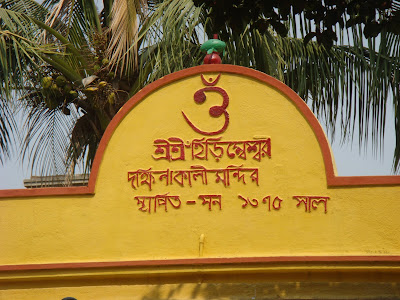 These temples are not very ancient but then we were told that Kalapahar, the notorious destroyer of temple in Bengal -- about whose depredations I had earlier written about in my post on the broken Shivalinga at Kankalitala -- had demolished the original temple that was located  here. 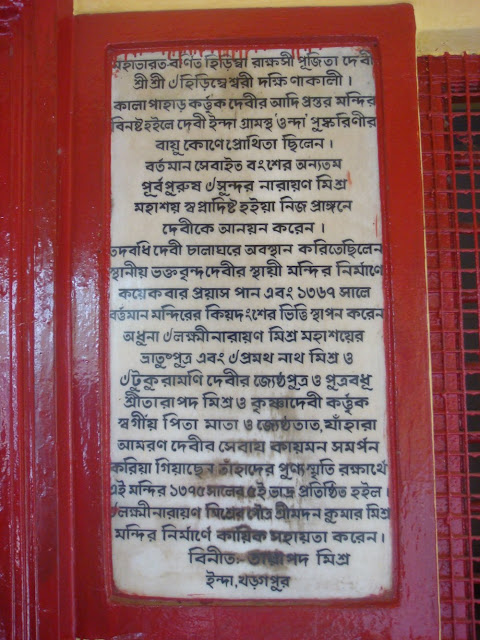 the only remnants of the original temple are some broken pillars that we managed to locate on the premises. 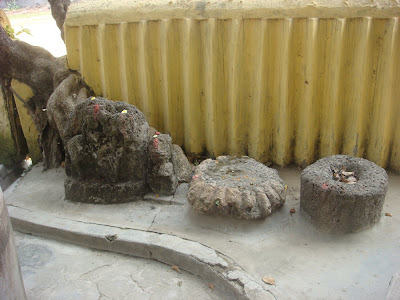 The Hirimbeshwari temple is within walking distance from the Khargeshwar temple and can be located in the following map.
An afterthought ..

If the legend of Princess Hirimba is indeed true, then she and her son Ghatotkoch who are mentioned in the Mahabharata can be considered to be the most famous people to have been born in this part of the country and perhaps IIT, Kharagpur can consider naming a new Hall of Residence or at least an auditorium after Ghatotkoch, the valiant tribal warrior, who stopped a cruise-missile kind of weapon fired by Karna and saved Arjuna and the Pandavas during the Mahabharata war !

The Ghatotkoch Hall of Residence will be a good break from the various goody-goody names that line Scholars Avenue !

Interesting piece of research sir. That explains why Bhima is also worshipped in Pathra region. We found an idol or two of him there.

Thanks for the Mythological information.Sir.

Story-telling has always been an art. Not everyone wields the power of imagination to write fiction, mixed with a little bit of facts. To lay claim to a way of pre-historic life has got a lot to do with negating all the other possibilities. It is here that mythological claims struggle to get established as valid truth claims. For instance, in the depiction given here, one may ask, what if Vyasa smartly mixed existing groups of people and their locale in his imagination of a fiction. Isn't it too natural that even modern day story tellers indulge in providing existing places for their fiction-characters. When Arundhati Roy wrote God of Small Things, she gave life to many fictitious characters to existing places in Kottayam. Will it mean that a few thousand years from the line, people would claim that those fictitious characters really lived because the places still exist ?