The Broken Shivalinga at Kankalitala

Kankalitala is one of the 51 Shakti Pithas in the Indian sub-continent and is a place of pilgrimage and tourism for those who visit Shantiniketan. While most visitors are happy to visit the tiny shrine of the divine mother, not too many take the trouble to walk another 100 metres to the shrine of the Pitha Bhairab -- the consort of Shakti -- who is referred to here as Ruru Bhairav. But those who do, get a glimpse of one of the darkest images of medieval Bengal.

Sulaiman Khan Karrani was the Pathan who ruled Bengal in the second half of the 16th century and his general KalaPahar [ the black mountain, perhaps an allusion to his physical size ], a Hindu who had converted to Islam was notorious as the demolisher of temples in Bengal and Orissa. Legend claims that he was finally killed before the temple of Sambaleshwari by the goddess herself in the guise of a milkmaid who seduced him and his people with a gift of milk and sweets that was laced with cholera germs.

Kala Pahar is known to have demolished a number of fine Hindu temples in Birbhum and the temple of Ruru Bhairav is one such. If you enter the temple today, you will see the dismal remnants of a giant Shivalingam that is nearly two feet in diameter and it is broken ! Unlike a normal Shivalinga that rises up and erect from its seat in the yoni of the Mother Goddess, this one has clearly been broken off -- with great force and malevolence -- near the ground. A piece of basalt this big does not break off or topple so easily .. and so it is natural to infer that this was the handiwork of someone who was inimical to the temple. 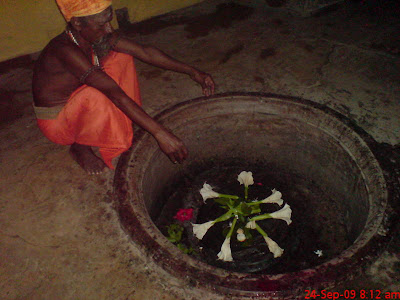