Subhas C Bose : The Mystery of his Disappearance

The "antardhan rahashya" or the mysterious disappearance of this charismatic and controversial political activist of pre-Independence India is a source of endless speculation. Let me add my twist to the tale ...

The "official" view is that he died in air-crash in Taiwan while flying from Saigon to "who knows where". In the dying days of the Second World War when the world was in turmoil there is not enough forensic evidence to come to this unambigous conclusion.

The conspiracy theorists believe that Subhas Bose fled to Russia and was held captive by Stalin at the instance of the British Government who did not want him back in India. This continued after India's independence because J N Nehru, the man who become the "king" of India after Independence did not want his erstwhile political rival to return as a pretender to the throne. He used his personal proximity with the Soviet leadership to keep Subhas Bose imprisoned in Russia and in return for this favour aligned himself with the Soviet regime under the garb of Non-alingment. These people believe that Subhas is still alive today ...

My personal view is more closely aligned towards the latter story but with a small twist.

I believe the air-crash never happened and Subhas faked it to throw the Allied powers of his trail. He subsequently tied up with a group of Japanese war-lords who, knowing that allied powers would capture Japan, had planned to set up a separate country in Manchuria. This would be the safe haven for the eastern Axis, just as Argentina and other South American countries were for the Nazi and western Axis.

These plan succeeded but only for a while. The Manchurian state was indeed set up and the conspirators along with Subhas Bose did reach with their bag and baggage. But their dreams of a safe haven were shattered by the Soviet army which along with the Chinese demolished this nasceant state [ my knowledge is a little fuzzy here .. not sure of the exact sequence of events but net-net Soviets overran the place]

Subhas Bose was either killed outright or died in prison.

The British were certainly aware of the fact but they did not wish to publicise it because Subhas was popular in India and it would not go down well if a British ally had murdered him.

And of course the confirmed hypocrites of the Indian communist movement would never have had the guts to acknowledge that their glorious leaders in Russia had murdered one of the most charismatic characters of the Indian independence movement.

Net-net Subhas Bose died, not a heroic figure fighting to the last but a fugitive from the war who was killed in flight. Not a very honourable end ... which is why no one really wants to get to the truth. 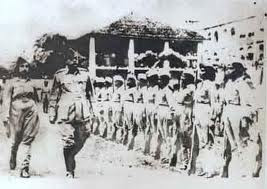 Email ThisBlogThis!Share to TwitterShare to FacebookShare to Pinterest
Labels: history

Thank you very much for this post. I gone thru some articles that Stalin got him captured and he Netaji died in soviet prison.

Excellent analytical thoughts in the blog, thank you! However, it does not feel good to know this aspect of one of the most revered leaders of our country.

A long chain of people seemed to have participated in the suppressing this truth. I wonder why none of them chose to break-off the chain, seek asylum in a safe country and reveal it all through memoirs for huge monetary gains. What common factor, so binding over last 70 years, to have resisted them or their kith and kin to have gone public?

Subhas C Chandra was a glorious leader from Eastern India. Due to lack of facts around his sad disappearance we get to see that sometimes his intentions and actions are criticised. I fear that this may catch a movement and shall leave scarred impression of this great leader in the eyes of our children who may shift towards imaginary world on learning that most of the historical role models were essentially ‘set-up’ to meet political ends.

May I suggest that we all direct our ire and energy to expose those who were supposedly in the know of the truth but eschew to reveal it. In the interim, we should continue to protect and eulogise the legacy of one of the bravest ‘action’ leader India ever saw.