HIVE and PIG to simplify Hadoop

[Note] -- Hadoop, IMHO, is history. Rather than waste time with all this, suggest you check up my blog post on Spark with Python.

When I was doing engineering at IIT, Kharagpur, the computers that we had were not even as powerful as a low-cost non-smart phone today and other than the basic concept of programming, nothing that we learnt is of any relevance today. So when we start a teaching a course on Business Analytics, that lies at the bleeding edge of  current technology and business practices, there is simply no option but to take the Do-It-Yourself approach of first learning a subject and then teaching it to students. Fortunately, there are many kind and knowledgeable souls on this planet who have taken the pains to explain new and difficult concepts to ancients like us and thanks to Google, it is not too difficult to locate them.

Using this route, I first learnt what is Data Science and then created this compilation of tutorials and training materials that anyone can use to learn about this new subject in greater depth. The next big challenge was to Demystify Hadoop and Map Reduce as these two key concepts play a very significant role in this area of interest. Writing Map Reduce programs in java, as is the standard practice, is a non-trivial task and many people have sought to simplify matters by adopting other approaches. One is to use the Hadoop streaming API and use a program written in any executable language like Python or R. HIVE and PIG are two other products that have evolved to ease and facilitate the use of MR techniques with Hadoop systems.

HIVE simulates an SQL based query engine sitting on top of the data stored in HDFS file system on Hadoop. Anyone familiar with SQL will immediately feel at home with the DDL, DML (load, insert) and Select commands.

PIG (and its humourously named command prompt, GRUNT > ) is a scripting language that allows one to run queries on data stored on HDFS without writing complex MR programs in Java.


We assume that you have followed instructions in the earlier blog post and you single machine cluster of Hadoop installed on a Ubuntu ( preferably 14.04) machine.

Varad Meru of Orzota has created a set of four excellent tutorials that we will use to get a grip on PIG and HIVE.

The first one talks about installing Hadoop 1.0.3, but we will ignore that because we have already learnt to install Hadoop 2.2.0.

The data that is used in the three other tutorials is called the Book Crossing Dataset that you can download as a zip file and then extract ONLY the file called BX-Books.csv for the purpose of the next three tutorials.

From this file we will answer the question of how many books are published in each calendar year. Not really rocket-science but enough to meet the requirements of requirements of how HIVE and PIG work.

instead of typing long HIVE commands by hand, we have created a file call goBX2.sql to store the various HIVE commands and by selectively un-commenting lines, we execute the different commands.

The only deviation from the instructions is
Also note that output is stored in file goBX2.output.

After using HIVE, the same task is performed using PIG by following instructions given in the tutorial PIG for Beginners.

There were two deviations from the instructions

the PIG commands were stored in a file goBX3.pig and executed from the shell script goBX1.sh
---
---

In this case, the output is stored in the HDFS file system that can be accessed thorough the browser at localhost:50075 and downloaded. 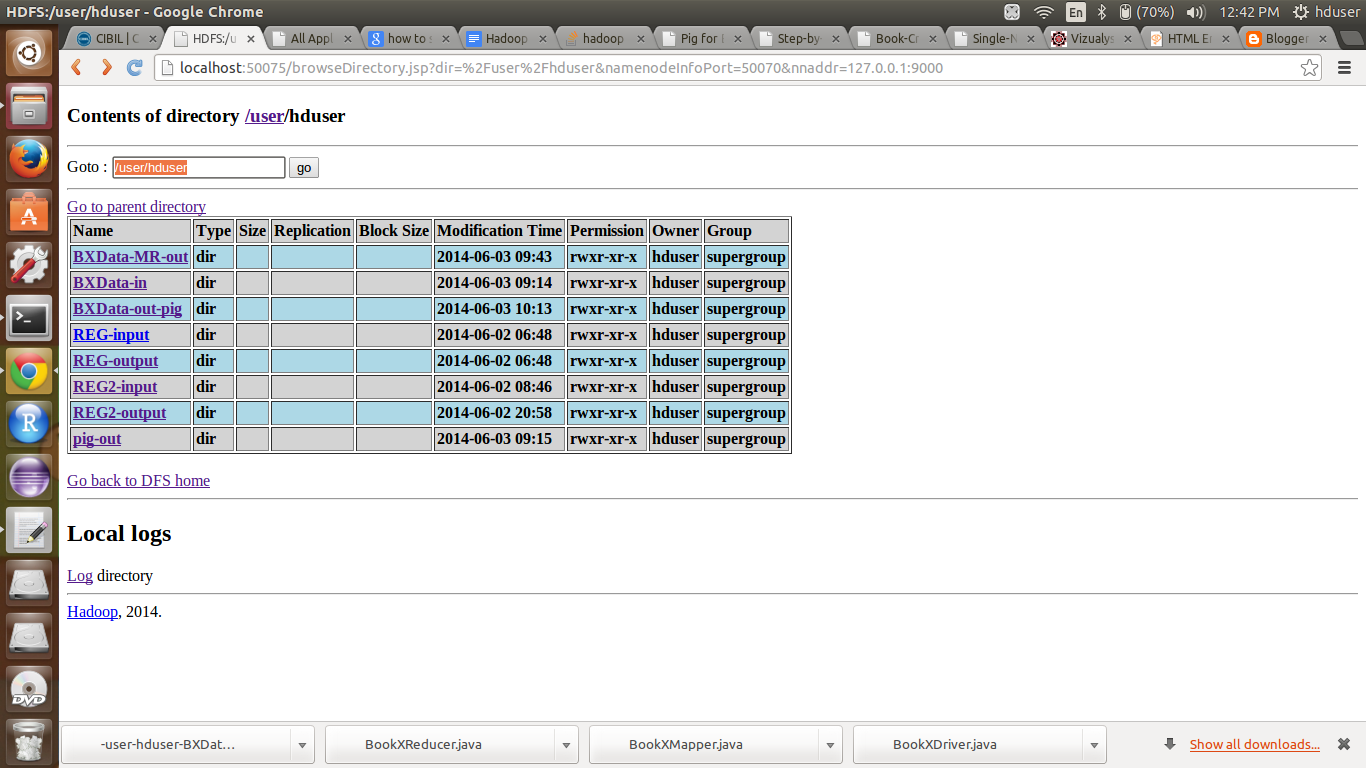 Finally, after using HIVE and then PIG to generate the data, one can use the standard Java route as explained in this fourth and final tutorial. There is really no need to configure Eclipse with Hadoop Plug-in ( the version for Hadoop 2.2.0 is not yet ready or stable, as of now ). You can simply download the three java files : BookXDriver, BookXMapper, and BookXReducer and then use the javac command from the ubuntu prompt as given in the shell script above. Once again the output will be stored in the HDFS directory /user/hudser/BXData-MR-out ( as show in the diagram above ) and can be downloaded for comparison with the two other results.

Ok, here is the final screenshot of the applications console available in the browser at localhost:8088 that shows all the three jobs to have executed successfully. 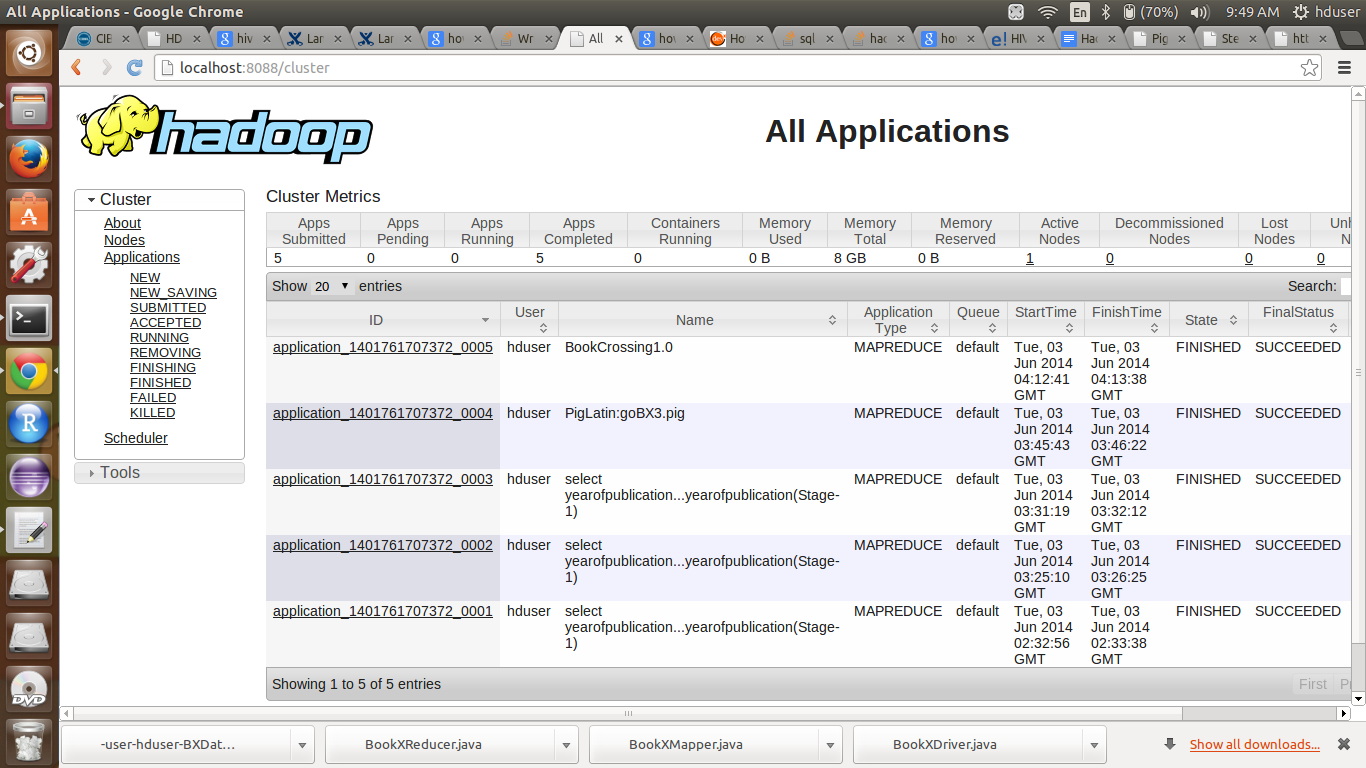 If you find any errors in this post, please leave a comment. If you find it useful, do share it with your friends ... and also check out the Business Analytics program at Praxis Business School.
Posted by Prithwis at 1:02 pm