The Hindu Heritage of Kashmir

Ever since the Independence of India, Kashmir has been the leitmotif of the hostility that has poisoned the relationship between the two South Asian neighbours. Born in the crucible of Hindu-Muslim antagonism that is erroneously attributed to the British policy of Divide & Rule but in reality has its origins in the clash of civilisations that has reverberated through the past 800 years, the Kashmir "problem" has been in the headlines for nearly half a century.

The Himalayas are an important part of the cultural heritage of India and Kashmir is no exception. Unfortunately, the Muslim rule of India that began with Qutb-ud-din-Aibak in Delhi (around 1206 CE) and ended with the deportation of Bahadur Shah Zafar to Rangoon (1857) has had the effect of rubbing out most of the Hindu footprint from Kashmir. Today, despite the uniqueness of Kashmir of being a beautiful valley situated high in the Himalayas, a geographic feature that is found nowhere else in the region, Kashmir has become associated with the image of terrorism and jihad and of a conflict between India and Pakistan, between Hindus and Muslims and between the syncretic culture of the South Asia and the medieval intolerance of  the Middle Eastern deserts.

I had visited Kashmir with my parents in the late 1960s and had visited the traditional tourist spots -- Gulmarg, Khilanmarg, Sonmarg, Pahalgam and Wular. This summer when I went back again we did the same circuit again but with a difference -- we were looking for the pre Islamic, Hindu heritage of Kashmir and to our great pleasure, this is what we found.
.. 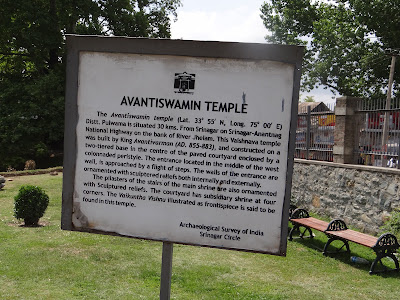 On the from Srinagar to Pahalgam are the ruins of the Avantiswamin Temple, dedicated to Lord Vishnu. Built in the 8th century AD and having fallen into neglect it was rediscovered by the British in the early years of the 20th century. A huge silver idol of Vishnu that was found here was promptly carted off to England but the smaller, stone idols are apparently stored in the museum at Srinagar. 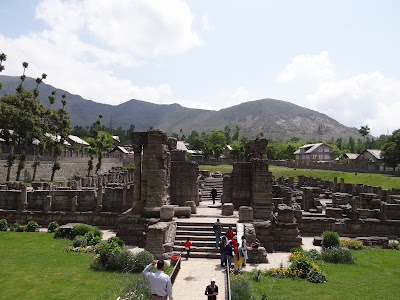 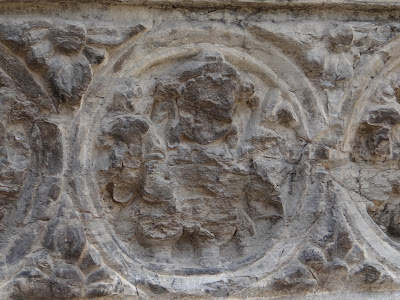 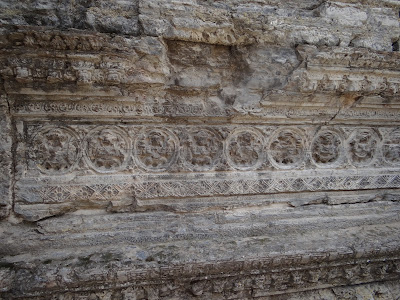 but we could locate the Navagraha idols along the wall panels 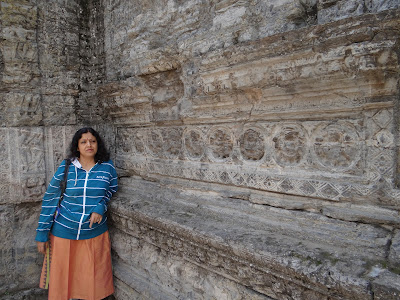 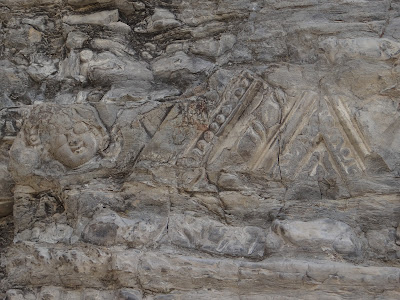 The figure above can be recognised very easily as Vishnu reclining on a serpent -- the Anantnaga. 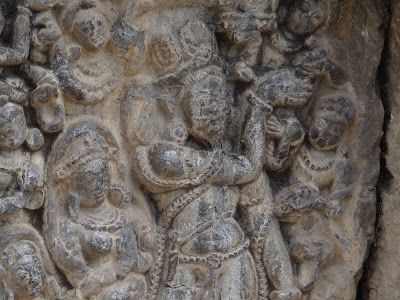 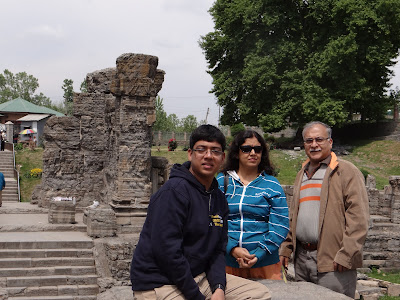 Out next point of interest was this tiny, temple at Pahalgam that has a history stretching hundreds of years into the Hindu past of Kashmir. 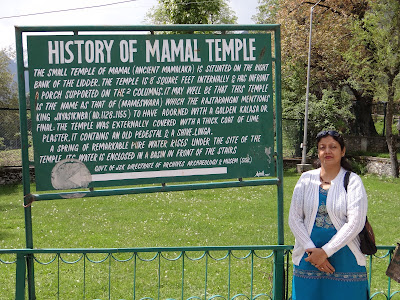 This temple on the right bank of the Lidder river in Pahalgam is mentioned in the Royal Chronicles of Kashmir, the RajaTarangini and so must have been built prior to 1100 AD 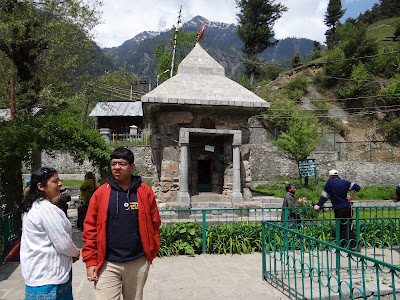 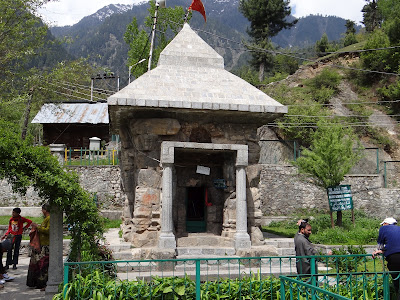 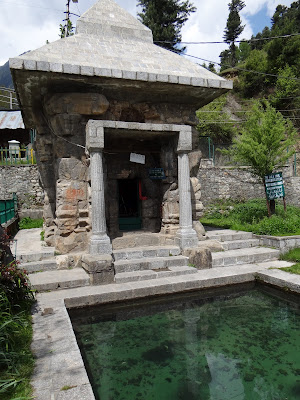 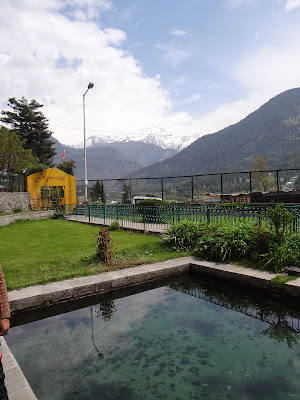 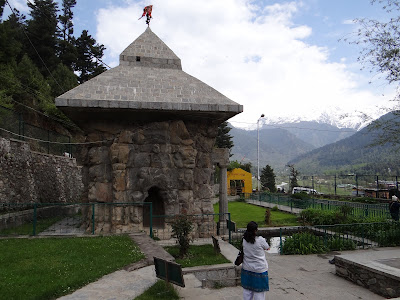 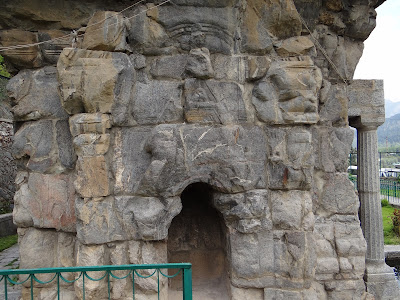 Our next point of interest is the very famous Khir Bhavani Temple, devoted to Shakti, the Mother Goddess. Legend says that the Goddess was the resident patron of Ravana, in distant Sri Lanka, but left her southern paradise after Ravana's misadventure with Rama, and took up residence in the cool climes of TullaMulla in present day Kashmir. 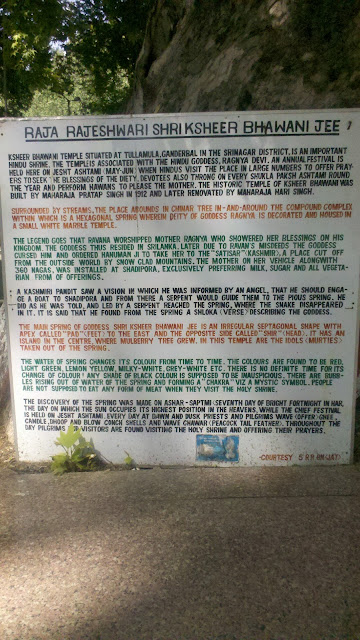 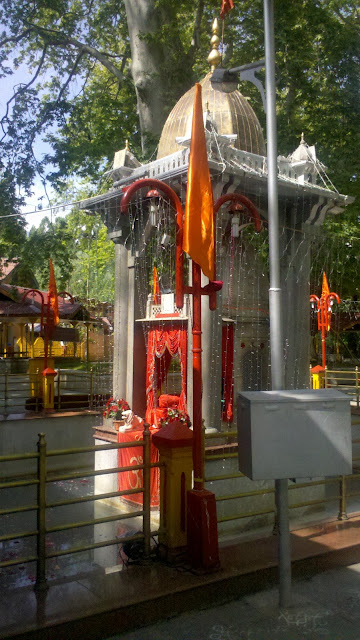 The temple of Khir Bhavani is a rare example of Hindu-Muslim fraternity in an otherwise troubled relationship. It is said that when Pakistan invaded Kashmir in 1947 -- before the state formally acceded to India -- and the Pakistani army was in the neighbourhood of the shrine -- the local people, including many Muslims, misguided the invading army away from the temple and saved it from destruction and desecration.

Today, the pristine environment of the temple is heavily guarded by loyal elements of the Indian Army and the Central Reserve Police Forces. 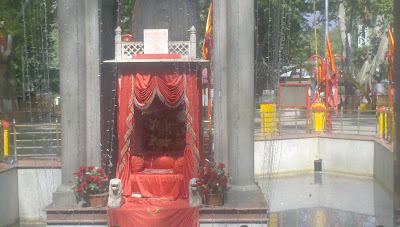 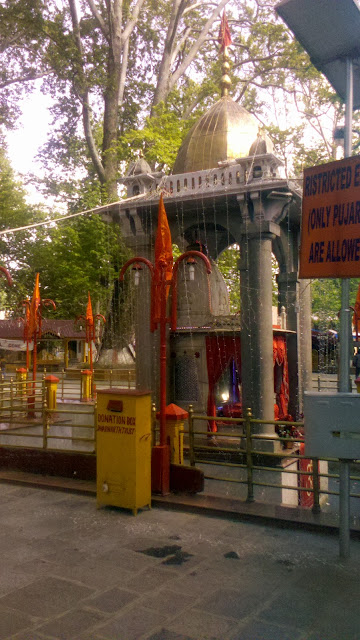 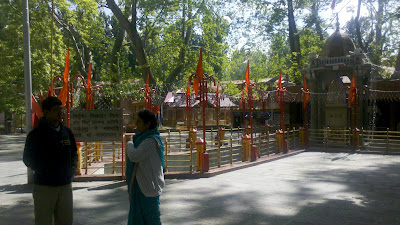 Khir Bhavani is right on the way to the more popular tourist destination of Sonmarg but most taxi drivers and tour operators would like to give this temple a miss. Despite our strong exhortations, our taxi driver refused to take a small diversion on the way to Sonmarg and so we had to come back again the next day. Interestingly, while at Khir Bhavani, we heard of another ancient Shiva temple in the neighbourhood -- near ManasBal which is a lake just adjacent to the more famous Wular Lake.

Once again the taxi driver feigned ignorance about this temple but after getting an extra Rs 500 bucks agreed to take us there. 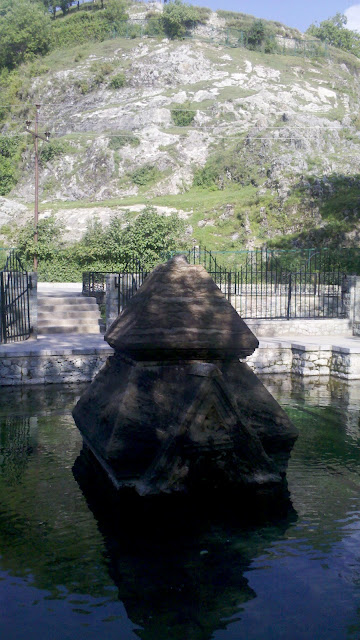 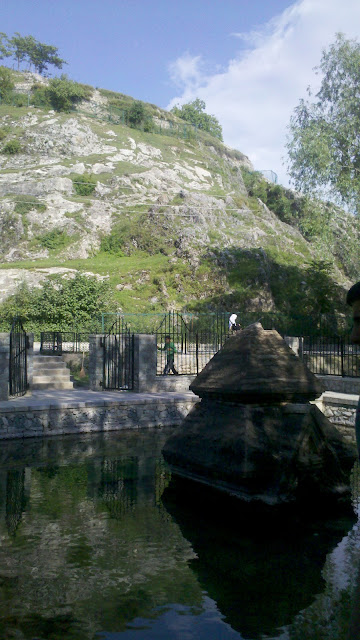 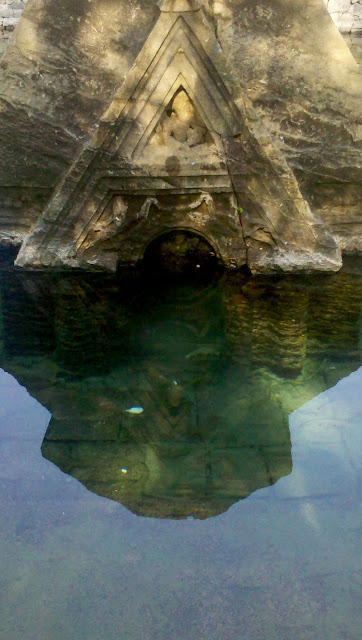 This temple too was built about 800 years ago by Raja Maithivarman but has since fallen into disuse and disrepair and is sinking into a pool of water that is an extension of the Manasbal lake. If you notice closely, you will see images of a strange variety of fish that is found in this pool. 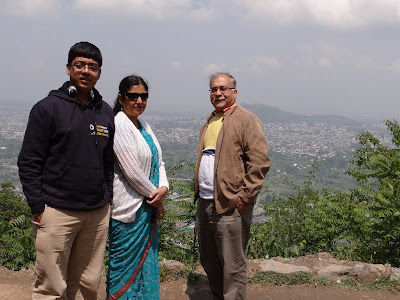 But the highest point of the Hindu heritage of Kashmir that we could visit -- both physically as well as metaphorically -- was the Sankaracharya Temple that is situated in the heart of, and dominates, the city of Srinagar.

Legend says that great Sankaracharya himself, when he had visited Kashmir, had met with and had engaged in a dialogue with Abhinava Gupta, the famous Shaiva seer of Kashmir in the neighbourhood of this temple itself and was convinced of the need to invoke the Shakti of the Mother Goddess to manifest the Brahman of the Advaitin in the physical world. The current temple is built on an octogonal base that goes back hundreds of years till the era of Shankar himself.

Situated at the highest point within the Kashmir valley and looking down on city of Srinagar, the Dal Lake, the Hazratbal Shrine and Moghul fort of Akbar, this small temple -- lovingly guarded by the Indian Army -- is one of the loudest proclamations of the Hindu heritage of Kashmir 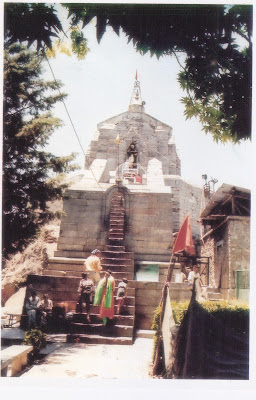 No travelogue on Kashmir is complete without descriptions of the snow, the saffron, the pashmina, the houseboats, the walnut wood artifacts, the shikara rides and the moghul gardens. However many others have written about these things and should the reader be interested there is no dearth of information that can be accessed through Google.

However just as we were about to embark on our return flight, I came across a lovely book on Lallashweri or Lal Ded the famous lady shaivaite saint of Kashmir. Once I finish reading that book I shall post some information about her.