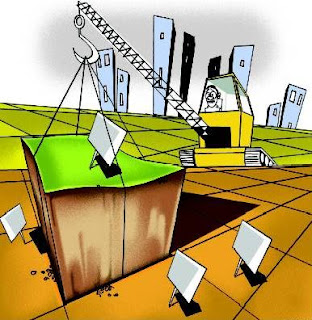 Given the current confrontational mood between industry and agriculture in the matter of acquisition of scarce land for industrial development it is imperative that we look at totally new or untried models. But before we do so let us first define some boundary conditions -- the Lakshman Rekha -- that cannot be transgressed.
The biggest challenge facing industry is that it needs large contiguous chunks of land but whenever word gets out that someone has bought some land in an area, land prices go up. It is not only that individual owners raise prices, but more often than not, land sharks get in, use strong arm tactics to buy land and then holds industry to ransom.

The saddest thing for a small land owner is to have to sell his land at low prices and then seeing a  huge appreciation of the land that he does not benefit from.

In this context the following approach can be adopted
Industrial houses that do not have the core competence of negotiating and acquiring land are spared the trouble of doing so. They will deal with a single corporate entity and negotiate a price for the land on standard commercial terms. Different LACs in different parts of the country will create a vibrant market mechanism that will lead to industry getting located at places where the price of land is competetive vis-a-vis other economic inputs like raw materials, labour, connectivity, political stability and quality of life.

Original land owners will not feel cheated because not only do they get an initial, possibly low, market price but they get to participate in the upside created by the development of the land and the relocation of industry.

One challenge would be the valuation of the locked in LAC shares that will be given to original landowners but this can be addressed through a variety of valuation norms, including listed prices from the stock exchange, that can be arrived at after further discussion.

To prevent abuse and fraud especially in the valuation of shares, the LACs may be put under the supervision of an industry regulator like SEBI, IRDA or TRAI.

I believe that this model is being used in some parts of the country but perhaps not as openly and transparently as described in this note.

Really novel approach
Yes, agree with Shri Prithwish. Farmers get unexpected money suddenly and they have a no idea how to utilize it, most of the farmer wasted their capital, because in rural areas farmers are mostly uneducated.
Farmers are left only with their dwellings and it is found that once they become landless, for generations they do not become capable to earn their proper livelihood from non-farm occupations. Mostly they work as a casual labourers in their neighbourhood of city and their socio-economic condition remain deplorable for decades together.
It is high time that Government must adopt the diffrent type of payment pattern where the productivity of land is calculated and the value is paid to the farmers for 30 years with consideration of cost escalation of agricultural produce during the years. It is the proper method through which farmers would slowly adopt to adjust with the non-farm livelihood, otherwise it is injustice to impose least value of land.