The Recursive Meta-Incompetence of the Indian State

Now that I have grabbed your attention with a couple of big and high sounding words let me justify their use in the title of this post. 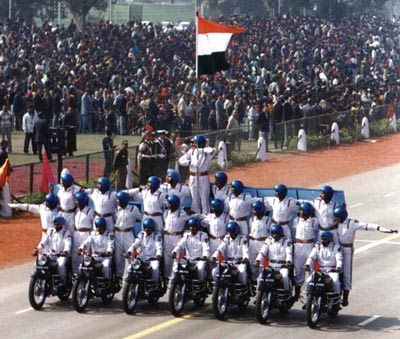 In any discussion of the Indian State, the first image that pops into our mind is that of the parade with which our armed forces salute the State -- through the person of the President -- on Republic Day. The spectacular nature of this parade, the precision with which the contingents -- both military and civilian ones -- walk, move, act and enact various scenarios is of course something to be proud of but the tragedy of the parade lies in the fact that it has no relation to the way the State actually works outside the parade route. Were we to move away from Rajpath and step into the dungeons of any sarkari daftar, the reality that will confront us is terrifying. Decrepit and stained with betel juice and with piles of dusty files covering innumerable empty desks, government offices -- whether central, state, municipal, panchayat or public sector corporates -- present a uniform image of lethargic indifference to the process of administration, governance or management. A few locations -- perhaps the offices of the uber-senior officers in government, or those of some PSUs -- may try to be different but that is only as far as looks go. If you look any deeper -- behind the feeble spit and polish -- the picture is an equally grim image of archaic and anarchic incompetence masquerading as indifferent authority.

Incompetence is the authoritative word here. It does not need a rocket scientist ( and I have always wondered why rocket scientists are brought into such discussions ! a molecular biologist would have done just as fine ) to figure out that the State is incompetent. Just in case you thought otherwise there are umpteen examples of simple projects taking just too long to finish or not being finished at all. While China has built the railway through Tibet we are still planning one in Sikkim and Arunachal whereas we had the expertise to build the Darjeeling Himalayan Railway in the last century ! Forget about railways in the Himalayas, we cannot even build a 200 feet culvert on Bakrahat Road ( 5 kms from Calcutta ) in the last two years. Or forget about roads .. we cannot even make sure that a letter from Prime Ministers office reaches that of the Chief Minister in time for him to attend a meeting in New Delhi. Pervasive incompetence : you see it in the eons that it takes for a municipal tax bill to be corrected for errors, for tax refund to be paid in time, for .... and the list go on and on ab nauseam.

In an earlier post I had argued that even if a government employee were to be not incompetent, the framework of authority, responsibility and trust within which government operates would ensure that nothing happens on schedule, within budget and meets quality standards. This was a view from the outside, but now that I am a part of the system and have a worms eye view of things, I would veer around to the view that competence is sorely in short supply over here !

Is this corporate arrogance ? Not really. We can look at umpteen examples but a good place to start as any would be the usage of computer technology -- or even something as simple as email -- in an office environment. This comes most naturally to even the most smallest of the private organisations but is a great rarity in the rarefied atmosphere of a government office. Most people in government would consider it beneath their dignity to read and respond to email but in reality it is more often than not beyond their ability to be online and proactive in responding to missives. Inability to use email or other technology is just one of the many instances of inefficiency or incompetence -- there are hundreds of "best practices" available in the world of that can lead to significant performance improvement but they find no place in the world of government office.

Why ? One quick answer could be corruption -- because efficient, elegant and transparent practices can root out corruption and that would not be in the interest of the various vested interests that inhabit these offices. But corruption is a part of the larger Indian story and not the subject of this article.

So if we ignore corruption why is it that government continue to perform at this abysmal low level of efficiency ? We go back to the original hypothesis that says that a statistically larger percentage of government employees are inefficient and incompetent. But how can that be ? We all come from the same demographic or genetic pool ! In the same family one brother works competently in the private sector and the other is a lethargic sarkari babu ?

The answer could lie in the fact that competent people are reluctant to join the government or if they do join, they would like to leave as soon as possible. It is like the process of diffusion in a gas-centrifuge that is used for Uranium enrichment where the heavier atoms get separated from the lighter atoms and we have different concentrations of U238 and U235 in different parts of the spinning container. So is the case here -- the surge and swell of society ensures that more of the smarter people stay outside the government than inside and so competence and efficiency is found in greater abundance outside the government than inside.

This is where the recursion kicks in. As more of the competent people choose stay out, the less competent and effective do government departments become ... and this drives out ( or keeps out ) even more competent people. This is a vicious cycle, a downward spiral that becomes worse and worse -- so there is really no hope for it to recover and so no incentive for any competent person to try and fix things. A normal incompetent person can sincerely try to improve his competence -- by seeking assistance with new tools and techniques -- but in this case the incompetence of the organisation is such that it cannot overcome its own incompetence. So it tend to take refuge in denial, bluster and false bravado -- who says government is incompetent ! I will pull his tongue out ! and take him to the equivalent of a privileges committee !!! This is meta-incompetence -- he who knows not and knows not he knows not is a fool, avoid him -- that is what smart people will do.

Is there a way out of this recursive meta-incompetence ? Is it possible for visionary, a crusader who can come in and fix the problem by the force of his personal leadership ? Can we not say that "as is the prince, so are the people" ? Sam Pitroda tried and got us going on the telecom but he could not do anything about the DoT/BSNL/MTNL and the sarkari telecom organisation. Perhaps there are other examples but none that has been anything close to successful and in the end we would have no option but to agree that "as are the people, so will be the prince" -- the system will finally get you.

But Sam left us with one great lesson : if you cannot redesign the sarkari organisation make it irrelevant so that we do not have to suffer at its hands. We do not mourn the death of BSNL, we celebrate the success of Bharti and Reliance !

That could be our only hope of escaping from the clutches of the recursive meta-incompetence that plagues the Indian state. Let us get the state out our lives. It is on its way out in industry and it would be wonderful if it could be shown the door in education, medical services, municipal services and -- some day -- out of judicial, [ see also this], taxation and security services.

We shall overcome our state, some day. Not like the Maoists with guns and murder but with bold ideas that can change the future.
Posted by Calcutta at 9:04 am

I remember telling my Vice President once – “…I want a more upfront and straightforward leadership approach from you which is easy to work with….”

I still have the e-mail and my job – intact.

I can’t think of the repercussion of the same thing getting repeated in a govt. scenario, I think getting the message through would be the most pressing problem as the language would be absolute Greek and beyond comprehension.

There's probably more corruption in the private sector anyways, but even that corruption is directed at getting the job done somehow.

I think the lack of competence is due to a lack of dignity of labour, and the disrepute that govt jobs have now gathered over the years. Even in times of recession, students from my college would prefer a low-paying job in a company like HP than work in a government agency. It's simply because we don't give the right amount of respect to government jobs nowadays. Unfortunately, unless this basic mindset changes, neither we nor the govt. can do much about it.

And btw I'm Soumya. If you remember, I met you in BITS Pilani some weeks ago.

thanks soumya .. for your comments and ofcourse i do remember you.
cheers

Bang on! The analysis part really hits the nail on reality. But more than that I would agree more with the conclusion. Our escape route lies in the celebration of the new and not in the death of the old order. Remnants of past are good place to visit on weekends for an explorer not to spend ones work-days.