The Paradox of the Happy Prisoner 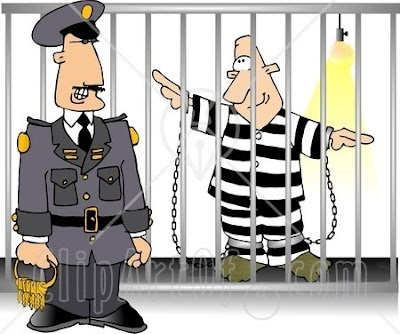 Maureen Dowd in her op-ed article -- Blue is the new Black -- published in the New York Times has referred to a survey that, if really true, should force us to seriously rethink the outcome of the War of Civilisations.

But first what is this survey all about ? "According to the General Social Survey, which has tracked Americans’ mood since 1972, and five other major studies around the world, women are getting gloomier and men are getting happier" .... First there is no further reference to this General Social Survey and to the five other major studies ... but we shall let that pass and focus what appears to be the core of Dowd's hypothesis. The reason that women are getting gloomier is because they have more choice today ! In the past, before feminist activism unshackled women from petty domesticity, women lived lives that were tightly controlled by the men in the family -- father, husband, father-in-law and son. They basically did what they were told to do ... and that was pretty much restricted to cooking, cleaning, managing the home and hearth and of course sex. But once these shackles fell away and women ventured out into schools, colleges, employment, entrepreneurship and what not it was thought that it would lead to a more fulfilling and happy life. But according to Dowd's article, what has happened is just the reverse. “Choice is inherently stressful,and women are being driven to distraction.” ! But even if one were to look at the bright side of things, women were "happy to have ... newfound abundance of choices, even if those choices end up making us unhappier" A paradox indeed !

We can now either disregard these 1+5 surveys and treat Dowd's article as utter trash, or else assume that she has indeed stumbled upon a fact of significance. Since the first option is a dead end let us instead explore the full implications of this paradox.

But the more important instances of liberation were the twin instances of (a) relegious and (b) political liberty. The renaissance and similar social movements showed that the gods and their agents on earth, the religious institutions, were no more the absolute arbitrars of what is right and wrong and in the political sphere, the disintegration of the feudal society and the divine right of kings demonstrated that the will of the people was supreme. In fact the pillars of modern civilisation is based on the premise that individuals have the freedom to do exactly what they want -- except that this should not infringe on the similar rights of another individual.

Opposed to this concept of personal freedom is the belief that society at large, manifested either (a) through a tyrannical state like Communist Russia, or kleptocratic Zimbabwe or (b) religious fanaticism as evident in Wahabi Islam -- knows what is good or bad and individual rights must necessarily be subordinate to the dictates of this society.

And this is precisely the point where Maureen Dowd's article strikes a thunderbolt ! If we extrapolate from her analysis of women's freedom and enlarge our discussion into the domain of general personal freedom then we are left with a bigger paradox : Are we happy to have an abundance of choice and freedom even if the exercise of the same choice makes us unhappy ? Is the prisoner happy to be confined to a fixed routine ? Or would he be happy if were given the choice of doing whatever he wanted to know ?

Cool story as for me. I'd like to read more about that theme. Thanks for sharing that data.
Joan Stepsen
Wise geek