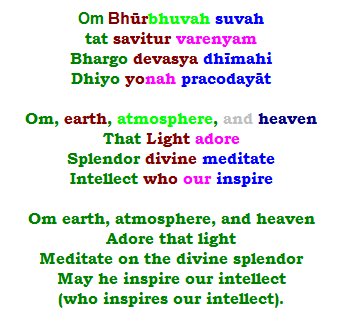 The "Gayatri" Mantra is actually a misnomer. Perhaps it should be called the Savitri Mantra, that is sung, or chanted, in the Gayatri metre. But irrespective of the name that we use to refer to it, it is fact that it is the most significant string of characters that is central to the Hindu way of life. From Kashmir to Kanyakumari, from Kamaksha to Kathiawar, this is one set of words that are universally recognised and held dear by the Hindu population or at least the scholarly and priestly class.

It is of course a different matter that this string of characters is almost impossible to translate into English or even any other Indian language. The syntax, the sequence of nouns and verbs, incredibly archaic ... and yet for those who can feel its throb in the echoes of the heart it is quite clear and lucid ... but of course inexpressible in a language other than the native Sanskrit.

I found this translation, which is first literal and then allegoric, to be the closest to what it perhaps means.
Posted by Calcutta at 6:10 pm

Email ThisBlogThis!Share to TwitterShare to FacebookShare to Pinterest
Labels: hinduism

Stumbled across your blog. Read...and learnt a lot.

Thank you for sharing this with me. I have a different take, rather interpretation though.

OM or AUM - is the primeval sound, the sound of the universe itself.

Our ancients have said that all our texts, especially the Vedas, have been ‘revealed’. This has been interpreted as - not being ‘man-made’ or of ‘human-origin’.

I think this is so because all this knowledge and wisdom already existed - much before humans evolved on this planet. And once our ancient munis and rishis were ready – in and from their hearts, minds and souls, and bowed before Mother Nature (Prakriti) – only then she ‘revealed’ herself, to them.

[Therefore, our ancients derived all their knowledge from Mother Nature herself; and passed it on to their deserving disciples - in the 'guru-shishya parampara'.

This 'illumined knowledge' (jnana) was accumulated by the great sages of yore (the Munis, the Rishis, the Yogis, the Maharshis and the Brhmarshis) through the ages - from nature (Prakriti), universe (Brhmaand) and space (Vyoma.)

This word – vyoma, contains the word "OM" or "AUM" - the sound of primal energy, the sound of the universe itself.]

Maybe through this mantra, our ancients are trying to acknowledge this – and hence referring to them (Om, Prakriti, Space) as ‘devasya’ – divine-like; and urging them to continue to guide and enlighten mankind in future as well.